November 29, 2013. Bentonville. Each year for the past half decade, more and more Wal-Mart employees go on a temporary strike on Black Friday to protest the retailer’s worst-in-the-nation employee wages. This year, both sides are claiming victory before the day even starts. But most experts believe protesters will win at some stores, but Wal-Mart will ultimately win the day with its growing online sales. 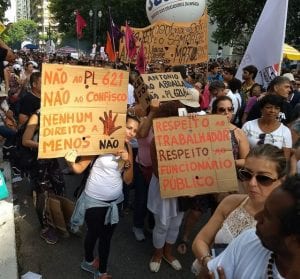 Wal-Mart strikers are out for Black Friday. Image courtesy of KSL.com.

As this article is being written, it’s before dawn on Black Friday and still too early in the day to tell how well the nationwide strike against Wal-Mart is going. Over the past two or three days, both sides have dug in and antagonized the other, promising to win not only the fight for the day’s sales, but the overall battle for higher wages.

While online news headlines are filled with days-old stories, the best place to find up to the minute details from the Black Friday battlefield is the Facebook page, ‘Wal-Mart Black Friday Strike.’ Already, local demonstrators are reporting in from cities like Chattanooga, Tennessee; Quincy, Illinois and a dozen others. There are even scattered reports of some employees from individual Targets and grocery stores going on strike this morning in a show of solidarity.

According to Forbes, Wal-Mart is going to win this labor dispute regardless of the strike, or the bribery investigation, or the criminal labor charges, or the fact that the corporation’s CEO was just forced to resign. The Wall Street news outlet might be right when you consider that the company’s value is near record highs and the retailer announced this morning that its website had received over 400 million page views on Thanksgiving alone.

“We will pursue our options to defend the company because we believe our actions were legal and justified,” Wal-Mart spokesman Kory Lundberg told Forbes, “The fact is, we provide good jobs and unparalleled opportunities for our associates. This is our busiest time of the year and we’re focused on serving our customers and helping them have a great holiday season.”

Lundberg went on to dismiss any concerns about this year’s Black Friday Strike by the store’s employees. He pointed to last year’s protests and the retailer’s estimation that only a tiny percentage of its more than one million employees participated. “There’s nothing new about the union’s campaign against Wal-Mart,” he said, “Look at what [they] said would happen [last year] versus what actually happened.”

Some Wall Street analysts dismiss Wal-Mart’s carefree public demeanor regarding the strike and poor worker relations in general. They insist the world’s largest retailer is more afraid than it’s letting on. The analysts suggest watching Wal-Mart’s TV commercials for evidence. They’re spending millions of dollars on advertising, not promoting the store’s low prices, but to convince people Wal-Mart is a great place to work.

A recent report from the progressive group CommonDreams.org says the Wal-Mart strike is going well. They point to the fact that employees at a number of the retailer’s outlets walked off the job early, days before Black Friday. Their website reports, ‘Workers in Miami, Florida and Brooklyn Center, Minnesota walked off the job Monday following actions in Tampa on Saturday and strikes in Sacramento, Dallas, Chicago, Seattle, Los Angeles and cities in Ohio earlier this month.’

Strike organizers estimate they will have Wal-Mart employees participating in Black Friday demonstrations at roughly 1,500 of the retailer’s stores. To give readers some indication of how widespread the protests are, Wal-Mart operates over 4,000 stores in the US. The pro-labor group is also providing a live Twitter feed so picketers can report in from across the country in real time. Already this morning, strikers in Washington DC are reporting that regular citizens are joining their protest in large numbers. As dawn spreads westward, time will tell if other stores and cities see similar success.

One report from the Daily Caller is predicting that the Black Friday strikes at Wal-Mart are, “set to fizzle.” They base that opinion on statements from various pro-business PACs and other anti-union organizations. “The emperor has no clothes here,” said Justin Wilson of the corporate-backed Center for Union Facts, “This is not even a strike, it’s a picket. And it’s a picket by union leaders, not Wal-Mart employees.”

According to Wilson, his anti-labor group infiltrated union meetings in Chicago, Raleigh and Pittsburgh earlier this week in an attempt to estimate the support level strike organizers had. He says the Black Friday Wal-Mart strike has zero support among actual store employees. Wilson’s account seems to contradict the reality on the ground outside stores, but he swears the strike planning meetings weren’t attended by anyone because there is no interest among workers.

‘Only two union activists – not Wal-Mart employees – showed up to the Chicago meeting on November 12,’ the report quotes Wilson saying, ‘Just four managed to make it to Pittsburgh’s strike planning committee this Wednesday. And an expected meeting in Raleigh earlier this month was canceled, apparently due to a complete lack of interest.’

In the interview, Justin Wilson details the field report he received from his agents that infiltrated the Chicago strike planning meeting. He describes a scene in which only a couple union activists showed up and no actual planning took place. Instead, he says, they spent all their time frantically making phone calls trying to scrape up support for the Black Friday strike. “The idea that there’s this mass uprising of Wal-Mart employees trying to unionize the stores when they can’t get more than 500 of them to actually turn out is ridiculous,” he finished, “just an absolute joke.”

In an email earlier this week from Black Friday strike supporters, the grassroots organizers appealed to regular Americans to support today’s Wal-Mart strike. ‘Walmart workers are mobilizing to take action on Black Friday in your area and they need you to support them directly, in the streets,’ the announcement begins.

The notice goes on to give some understanding as to why Wal-Mart employees are striking, ‘All around the country, Walmart workers are standing up. They have gone on strike in Dallas, Cincinnati, and Southern California to protest Walmart’s attempts to silence them by firing and disciplining those who stand up for their coworkers’ rights. They’re tired of looking their children in the eyes and having to explain why there’s no food in the cabinets while they work for one of the most profitable companies in the world.’

Another experienced and organized movement that has come out in support of striking Wal-Mart workers is Occupy Wall Street. The website OccupyWallSt.org is featuring the same Twitter feed mentioned above – #WalmartStrikers – to stay in touch and offer feedback, reports and words of encouragement. As an example, the most recent tweet from only a few seconds ago showed a picture of two dozen protesters heading out to their local Wal-Mart. The tweet immediately following was from a picketer describing the overwhelming police presence at her local store.

The final result of today’s Wal-Mart employee strike may end up being a higher minimum wage in some states, and possibly even the entire nation. But if protesters were hoping to dent Wal-Mart’s sales on the most profitable day of the year, they may have been outflanked by the internet. Some retailers are already suggesting that in-store sales at all retailers will be disappointing, but that it will be more than made up for in online sales. Perhaps next year the Wal-Mart Black Friday strikers will coordinate with Anonymous and hit the world’s largest retailer where it would really do some damage – their web site and online store.