We all grew up arguing about the face on Mars – the giant rock that looks remarkably like a human face. If NASA can be believed, pictures of the same spot brought back to Earth years later prove it to be just a pile of rocks. The latest pictures sent back from the Mars rover have created another firestorm. The images look like lizards, all of them except the one that looks like a human. View them here.

Ever since the Viking Lander sent back the picture of the Martian Face in 1976, humans have speculated about whether there was ever life on the red planet. Some even wonder if maybe we’re not the Martians ourselves, having colonized Earth millions of years ago when we destroyed our Martian home. After all, it’s not like humans don’t have an internal urge to carve their faces into giant stone slabs. Could the Martian face be mankind’s instinctive galactic calling card, just like Mt. Rushmore?

Remember this? It’s the original 1976 picture of the Martian face next to a follow-up image taken a few years ago to finally disprove the theory once and for all. Image courtesy of the Daily Kos.

The latest pictures from Mars

In September, NASA released the latest batch of pictures from the Mars rover Curiosity. They were also published by Space.com. Among the dozens of images made available to the public are a handful taken of the barren rock landscape. Upon further inspection however, there appear to be animals captured in the pictures. And just like on Earth, their colors and shapes blend in perfectly with their surroundings.

Before we get to the Martian lizards, we first have to show you the ‘alien’. This picture enhances one small portion of a Mars Curiosity photo, revealing what looks like a human-shaped alien of some kind. The figure appears to be sitting or leaning like any person would in the same environment and includes a visible head, arm, shoulder, torso and thigh.

Find the hidden picture. On this one, people seem to see all sorts of reptilian animals. The largest rock looks like a cross between a frog and a Komodo Dragon. There also appears to be a turtle and a number of snakes and smaller tube-shaped rocks. One curious observation is that we don’t see any rocks that look like tigers or salmon, or monkeys, or giraffes, or dogs. If they really are random rock formations, why are they all shaped like lizards and reptiles?

Okay, here’s one that’s finally not a lizard. It sure looks like a Martian chipmunk. It has everything, including visible eyes, ears, arms and head. 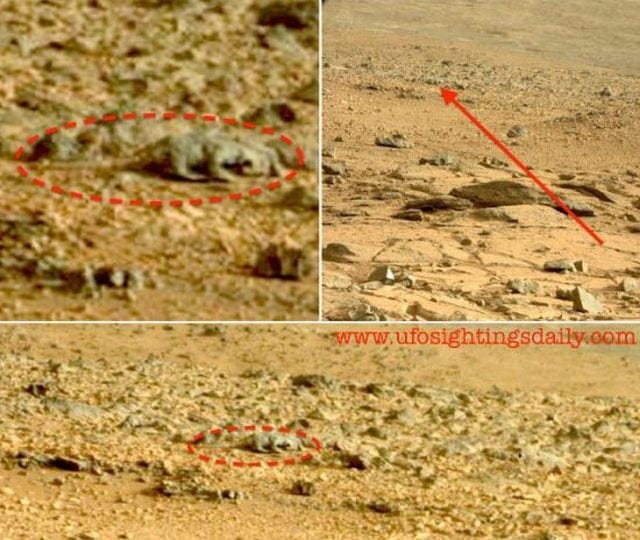 If there’s ever a picture that goes down in history as the one that first discovered the Martian lizards, it’s this one. Assuming that the other side of the mysterious rock-animal is the same as the visible side, it’s fair to say it has a head, eyes, two front legs, two back legs, four feet, two shoulders, two thighs, a tail, and the most precise anatomy of a lizard any rock has ever had, if that’s what it is.

With the controversy just beginning, we’ll keep an eye out for more Martian rock lizards. It’s a sure bet that after this latest round of images from NASA, alien hunters are breaking out their magnifying glasses and reviewing every picture sent back from the Mars rovers.

WhiteOut Press - August 13, 2022 0
Bloomberg above the law The definition of ‘oligarch’ according to Google is, ‘A very rich businessman with a great deal of political influence.’ And the...