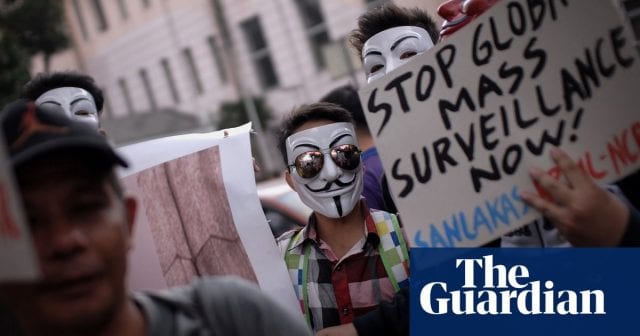 October 30, 2013. Washington. An anti-NSA, anti-spying rally was held in Washington this weekend on the 12th anniversary of the passage of the Patriot Act. It was organized to protest the ever-expanding spying by the US federal government. While most grassroots activists on the left and right were happy to work together for a change, some were too overcome by their own animosity and others actually sided with the NSA. 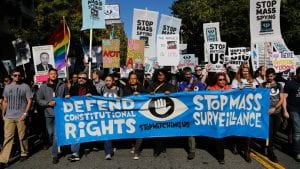 This weekend’s anti-spying rally in Washington is a popular topic this week. It’s surprising since it was such a small event with poor PR and limited grassroots organizing. The venue, speakers and media attention warranted a crowd of tens of thousands. But in the end, news outlets argued whether the rally drew “thousands” or mere “hundreds”.

The media site Salon.com struck first a week before the anti-NSA rally when it published a scathing article by Tom Watson titled, ‘Don’t ally with libertarians’. In it, the author announces, “I cannot support this coalition or the rally. It is fatally compromised by the prominent leadership and participation of the Libertarian Party and other libertarian student groups. Their hardcore ideology stands in direct opposition to almost everything I believe in as a social democrat.”

The outrage seemed misplaced as the Libertarian Party is one of the few places where the left and right actually work together successfully. But Watson went on to condemn the LP for its perceived stance of eliminating social welfare programs and leaving America’s poor to fend for themselves. That’s an often-leveled criticism of libertarians who typically insist charities and food banks can replace Uncle Sam in the welfare department.

Darryl Perry from Free Press Publications was quick to respond to Watson and Salon’s divisive article with his own titled, ‘Tom Watson hates Libertarians more than he hates the NSA’. Perry begins with an informative brief history of the Patriot Act and how it was sponsored by Rep. Jim Sensenbrenner (R-WI) and actually titled, ‘the Uniting and Strengthening America by Providing Appropriate Tools Required to Intercept and Obstruct Terrorism Act of 2001’.

Perry also republishes whistleblower Edward Snowden’s remarks for this weekend’s anti-spying rally before finishing his piece with some last words for Salon’s Tom Watson. “It seems that Watson doesn’t want a coalition opposing the NSA, he wants people to agree with him on every issue,” Perry defended libertarians, “That’s fine, in a libertarian society without a central government, you’re still free to be a ‘social democrat’, you just don’t get to force that belief on others.”

Joining the debate, as well as the rally itself, the Libertarian Party had nothing but praise for this weekend’s anti-NSA rally. Party Executive Director Wes Benedict released a statement congratulating former Libertarian Party Presidential nominee Gary Johnson for his wonderful speech. Benedict even quotes one fellow rally demonstrator that he describes as a ‘progressive’ saying, “It’s scary when the libertarian is the best speaker at an event like this. He was good.”

Confirming that the crowd truly was a mix of grassroots activists and demonstrators from both the left and the right, the LP’s Executive Director wrote, ‘A coalition of more than 100 organizations from across the political map (authoritarians excluded) gathered on Saturday in Washington, DC, to stand up for the Fourth Amendment right to privacy. While some libertarians participated, the crowd included many from the far left and right. So I was pleasantly surprised by how enthusiastically the crowd responded to Gary Johnson’s speech.’

Wes Benedict also had a response for Tom Watson’s Salon piece condemning the libertarians and the rally. Benedict wrote, ‘Earlier in the week, a blogger at Salon tried to discourage progressives from joining forces with Libertarians at this event – perhaps scared that progressives might be tempted to take a look at more of our libertarian principles? Anthony Gregory of the Independent Institute did a fine job pointing out, “If there is any hope in beating back the surveillance state, it will surely require more than a fringe coalition of Democrats.”’

Perhaps none of the media and participant reports from this weekend’s anti-spying rally in Washington DC were as one-sided and hostile as the editorial from the self-described ‘conservative’ media watchdog group Accuracy In Media. They not only condemned the left, but also the right. Anyone in support of the united anti-NSA rally became a prime target for their attacks.

Their report is titled, ‘GOP Congressman flees Anti-NSA Rally’ and it takes aim at Rep. Justin Amash (R-MI). They credit Amash with co-sponsoring a bi-partisan Bill with fellow Michigan Congressman John Conyers (D-MI) that would have defunded the NSA. The Bill was defeated but garnered much more bi-partisan support than anyone expected and it launched the first-term Michigan Republican to the forefront of America’s government spying debate.

The article by AIM says that Rep. Amash, who was one of the featured speakers at Saturday’s rally, ‘clearly seemed uncomfortable on stage’ and ‘then quickly walked away in order to avoid interviews with the press.’ The account also describes how an NBC reporter chased the Congressman and tried to ‘corner’ him in order to get a statement.

For a group calling itself Accuracy In Media, it wasn’t indicative in their description of this weekend’s anti-NSA rally. First, they denied it was a united effort and in reality just a, ‘far-left anti-NSA rally.’ The piece then inexplicably went on to label Republican Justin Amash a ‘Libertarian’ and Libertarian Presidential nominee Gary Johnson a ‘Republican’.

The editorial goes on to clearly show which side of the government spying debate AIM is on when it says, ‘The rally was designed specifically for the purpose of supporting Snowden and his criminal disclosures.’ Portions of the article read as if they could have been written by the NSA itself saying, ‘Snowden’s disclosures about the nature and extent of US surveillance programs have clearly benefitted America’s enemies and damaged America’s international standing in the world.’

The conservative outlet also gave its impression of what it saw in Saturday’s anti-NSA rally in Washington writing, ‘USA Today said “thousands” had rallied against the NSA, but several hundred was a more accurate estimate. The crowd included members of Code Pink, the Marxist organization that frequently demonstrates against aid to Israel; extremists from the Lyndon LaRouche organization (with posters showing Obama with a Hitler mustache); ACLU activists; and advocates for American “political prisoners” such as convicted cop-killer Joanne Chesimard (a member of the Black Liberation Army who escaped to Cuba).’

The account also listed, ‘the ANSWER Coalition, a front of the Party for Socialism and Liberation, and the International Socialist Organization (ISO).’ And it attributed featured speaker Glenn Greenwald with once saying, ‘that the “weakening of America” is a “very good thing.”’ Another rally sponsor, the Council on American-Islamic Relations, was called ‘a Muslim Brotherhood organization.’

Instead of supporting the anti-spying movement, or even remaining impartial, AIM finishes their review of Saturday’s anti-NSA rally by loudly proclaiming their support for the spy agency. They quote former UN Ambassador John Bolton, who calls Snowden a traitor, saying, “It doesn’t bother me at all…it is the duty of the President…to take steps to protect America and if that means conducting espionage, even on friends, absolutely.”

Secret NSA Spy Network is messed up like Obamacare’s

WhiteOut Press - July 3, 2022 0
These 8 Men are richer than Half the World combined   By Mark Wachtler January 17, 2017. (ONN) The anti-poverty organization Oxfam International issued a report yesterday...