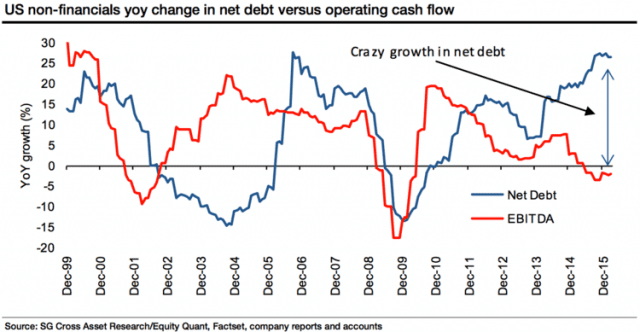 October 28, 2013. America is on the verge of the largest debt default the world has ever seen. And what that world will do to the American people – or what anyone does to someone who defaults on their debts – remains to be seen. While government officials from both parties refuse to come clean with the nation and its creditors, it’s becoming more and more obvious that the US is close to default, and on a massive scale. 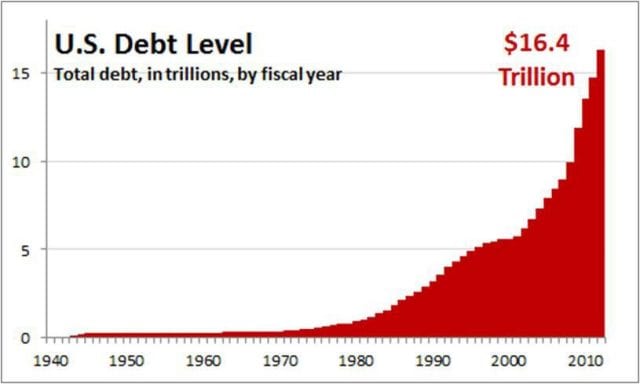 A glimpse at America’s skyrocketing debt.

When the government shut itself down earlier this month and the nation was 24 hours away from not paying its bills, the media erupted with enraged officials, economists and news anchors unanimously insisting there was no way America would ever default on its debts. The idea, they irately assured us, was crazy and impossible. Stepping away from Washington and Wall Street and into the real world however, reveals the possibility of defaulting is getting more probable every day.

America should have defaulted on its debts a couple years ago. But President Obama and Federal Reserve Chairman Ben Bernanke devised a self-destructive plan to save the country. It’s called ‘Quantitative Easing’. The Treasury would simply print trillions and trillions of un-backed US Dollars and the White House would aim the US military at any country that dared to challenge the value of America’s paper currency. In reality, the US Dollar is worthless. But everybody’s too afraid or too invested to admit it.

With the recent US government debt crisis also came a chorus of experts who have endorsed the idea of defaulting on America’s debt. Many have differing reasons, but they come to the same conclusion. One of those individuals is Rep. Alan Grayson (D-FL) who is a vocal proponent of the idea. But he says he got the notion from retired Congressman and past GOP Presidential candidate Ron Paul.

Jim Tobin from Taxpayers United of America quoted Grayson recently when he also endorsed the idea of default. The longtime consumer and taxpayer advocate said, “The solution advocated by Paul and Grayson is brilliant and elegant. Bernanke should simply cancel the Treasury debt that it owns. The government can just forgive the government’s debt.”

Rep. Grayson reminds voters that the FED only holds about $2 trillion of America’s $17 trillion national debt, but says it’s a great way to give the country some breathing room under the Debt Ceiling limit. Tobin agrees saying, “Grayson is absolutely correct when he says the debt held on the balance sheet can be canceled without any significant consequence. It is a bookkeeping artifact corresponding to the money supply. In essence, the government owes this money to itself. This is not a debt problem; it is an accounting problem.”

We at Whiteout Press don’t necessarily agree. Since the Federal Reserve, Treasury, Congress and the White House are treating the US Dollar like Monopoly money, let’s use that as our example of what’s really happening in the US and world economy.

Imagine you’re playing Monopoly and you run out of money and should lose the game according to the rules. But being America, you grab some blank white paper and a pencil and scribble the numbers $500 on each piece and lone yourself $25,000 in fake paper money to continue playing the game. Your fake money is now in the hands of each player as well as the game’s bank. The other players protested, but you threatened to beat them up and take the game home if they didn’t keep quiet and play along.

Now, you decide to forgive the $25,000 loan you made to yourself using the fake money. That’s fine. But that still doesn’t give value to the fake paper money you gave the other players – like me, China and the Social Security Trust Fund. And everyone wants the value of that money, not the worthless paper. You see America’s dilemma?

For more details about the national debt, read the Whiteout Press article, ‘The numbers behind the Shutdown and Default’.

America’s Debt Bubble is about to burst

When the Housing Bubble burst in 2008, candidates John McCain and Barack Obama rushed to the White House to save the day for President Bush who was traumatized and seemingly frozen like a deer caught in the headlights of an economic Armageddon. Major banks had created and sold worthless mortgage-backed securities to unsuspecting victims all over the world. But on other floors of the same big banks, employees were investing the bank’s money and that of its depositors into those same worthless derivatives.

When the banks’ own investment vehicles were deemed worthless and couldn’t be sold to raise money, the banks ran out of cash. When they ran out of cash, they stopped lending to American citizens and businesses. Stores closed overnight and tens of millions, including your author, lost their jobs.

Lehman Brothers was the first to go bankrupt and it should have taken all the others with it. But the federal government stepped in. They could have given US homeowners the $1 trillion bailout so they could give it to the banks and get caught up on their own individual mortgages – thus saving everyone.

But Congress, Bush and Obama all repeatedly skipped over the distressed homeowners and gave the bailout directly to the banks. The money was supposed to be used to make loans and kick-start the economy, but it didn’t happen. Just as examples, Bank of America sent its billions to China to buy banks there while AIG gave its record-braking bailout money to Goldman Sachs. Anyone who remembers what 2009 was like will appreciate what’s coming just around the bend if America defaults on its debts.

For 30 years, Democrats were ‘tax and spend’ while Republicans were ‘borrow and spend’. Today, those roles have nearly reversed. It’s the Republicans who insist the nation can’t afford to borrow any more and must start planning for the future. While the Democrats, lead by President Obama, insist we can continue borrowing forever until the nation is a ba-zillion dollars in debt. That’s why it was so ironic during the shutdown to see one TV network after another demonize the GOP for being “irresponsible” while crowing Democrats the “responsible” ones.

America’s debt – by the numbers

According to the US Debt Clock, America’s national debt now stands at over $17 trillion. According to the clock, that’s $53,825 owed by every single man, woman and child in America. But that only includes the money we’ve already borrowed and spent. It doesn’t even include the multi-year contracts we have with corporations, ongoing government employee pension payments, ongoing Medicaid and Medicare bills, and the biggest of all – future Social Security payments that have already been paid for with decades of payroll deductions. If we include those financial obligations, America is closer to $80 trillion in debt.

Also, the above numbers only reflect the federal government’s debt. They don’t include taxpayers’ debt obligations for their state, county, city and personal debt. When all the debts each American is currently drowning in are added together, readers can see why more and more experts are predicting that the United States is about to default and the biggest debt bubble in history is about to burst.

To illustrate their point, let’s use your author’s geographic setting as the example. Below are each of the various average debts each American is responsible for:

The scary part about the above numbers is that they only represent the average debt owed by one American. In many readers’ cases, we’re adults responsible for one or more dependents. The average adult has two kids and most official ‘household figures’ are roughly based on a family size of three. So, one in three Americans is responsible for two others who are too old, too young or too unemployed to pay their debts. That brings the total to just under a half million dollars for each head of household.

When one takes into consideration the fact that half of all Americans have a net worth of zero or below, including the adults financially responsible for two other dependents, it means the other half of that one-third will have to pay for the other five-sixths. But a deeper look into America’s current economics shows that only the top 10% of the American people have the ability to pay their own portion of the debt. And as rich as they are, even they don’t have enough money to pay the debts of the entire country. That’s why America’s debt will never be fully repaid and as long as we keep going deeper and deeper, default is just around the corner.