October 18, 2013. Washington. With 24 hours until the US federal government began defaulting on debt payments, Congress quickly voted to restore funding and raise the nation’s debt limit again. Contrary to the President’s promise, the law is filled with billions in earmarks and pork and even a fortune in free money for one of the richest families in government. 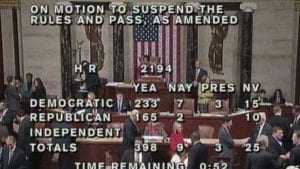 The final vote to end the shutdown and raise the debt limit was closer than most expected. Image courtesy of CSPAN.

While all 366 Congressional Democrats voted in lock step to restore and increase the government’s spending, 162 Republicans voted to keep the government shut down and the nation’s massive 17 trillion dollar debt where it’s at. As the GOP establishment capitulated to Democrats and the President, two-thirds of House Republicans and almost half of Senate Republicans stood firm and voted ‘No’.

Again, in the US Senate, the vote to end the shutdown and increase the nation’s national debt was 81-18. In the US House, the vote was 285-144. The law funds the federal government until January 15 and increases the nation’s debt limit until mid-February.

WhiteOut Press - July 3, 2022 0
These 8 Men are richer than Half the World combined   By Mark Wachtler January 17, 2017. (ONN) The anti-poverty organization Oxfam International issued a report yesterday...