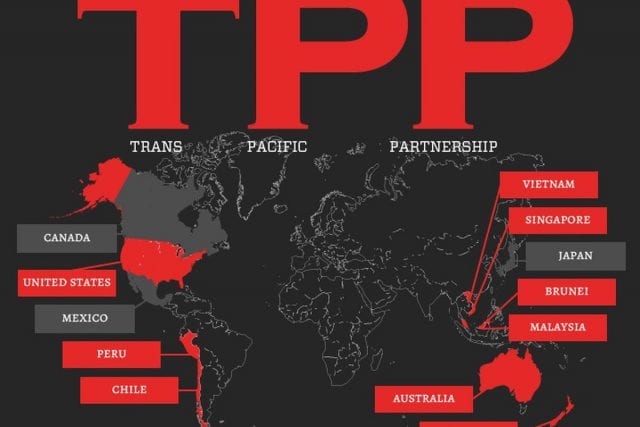 November 14, 2013. Salt Lake City. As representatives of the 12 Trans-Pacific nations making up the TPP trade agreement meet in Washington and Salt Lake City today, their discussions are sure to include yesterday’s leak by WikiLeaks of parts of the secret treaty. Critics who’ve read the excerpts insist the deal is even worse for America than originally thought.

‘Today, 13 November 2013, WikiLeaks released the secret negotiated draft text for the entire TPP (Trans-Pacific Partnership) Intellectual Property Rights Chapter,’ the WikiLeaks website announced yesterday, ‘The TPP is the largest-ever economic treaty, encompassing nations representing more than 40 per cent of the world’s GDP…The chapter published by WikiLeaks is perhaps the most controversial chapter of the TPP due to its wide-ranging effects on medicines, publishers, internet services, civil liberties and biological patents. Significantly, the released text includes the negotiation positions and disagreements between all 12 prospective member states.’

The WikiLeaks press release reiterates what many TPP critics have warned all along – that the trade deal is a massive power and money grab by the world’s largest corporations. Nothing seems to illustrate that more than the fact that nobody, including the American people or even the US Congress, is allowed to read the TPP treaty.

The announcement explains, ‘Since the beginning of the TPP negotiations, the process of drafting and negotiating the treaty’s chapters has been shrouded in an unprecedented level of secrecy. Access to drafts of the TPP chapters is shielded from the general public. Members of the US Congress are only able to view selected portions of treaty-related documents in highly restrictive conditions and under strict supervision. It has been previously revealed that only three individuals in each TPP nation have access to the full text of the agreement, while 600 ’trade advisers’ – lobbyists guarding the interests of large US corporations such as Chevron, Halliburton, Monsanto and Walmart – are granted privileged access to crucial sections of the treaty text.’

The copy of the TPP treaty provided to WikiLeaks after the multi-national meeting in Brunei three months ago included a rare surprise bonus. Written onto the documents were the positions of the countries involved in the negotiations regarding the various areas in dispute. Julian Assange was exceptionally critical of his own Australia, calling them, “cringingly obsequious” to the demands of the US.

Assange went on to describe the TPP’s intellectual property section warning, “If instituted, the TPP’s IP regime would trample over individual rights and free expression, as well as ride roughshod over the intellectual and creative commons. If you read, write, publish, think, listen, dance, sing or invent; if you farm or consume food; if you’re ill now or might one day be ill, the TPP has you in its crosshairs.”

While the text of the TPP trade deal is secret, the Office of the United States Trade Representative has published a brief summary of what the Obama administration feels are the benefits of the agreement. The site is riddled with contradictions and half-truths including the very first paragraph.

The US Trade Representative site begins, ‘The Obama Administration, working in close partnership with Congress and with a wide range of stakeholders, is seeking to conclude a strong agreement that addresses the issues that US businesses and workers are facing in the 21st century.’ In reality, Congress has been exceptionally critical of the President because they’ve been completely shut out of the process and haven’t even been allowed to see the secret TPP agreement.

The US government’s website includes the list of ‘trans-Pacific’ nations that make up the treaty. They include Australia, Brunei Darussalam, Canada, Chile, Malaysia, Mexico, New Zealand, Peru, Singapore, and Vietnam. The site also mentions that, ‘On April 24, 2013, the United States Trade Representative notified Congress of its intent to include Japan, the world’s third largest economy, in the TPP negotiations.’

The two countries most conspicuously missing from the TPP group of nations are China and Russia. Both are major economies and trade partners along the Pacific rim. Some political analysts suggest the TPP treaty is a hedge by America’s smaller Pacific allies against the rapidly growing expansion of China’s economic and military footprint. Not only have Russia, and to a lesser extent China, thwarted numerous US efforts in the United Nations, but China has repeatedly come close to military confrontation with some of its neighbors over territorial claims in the China Sea, especially Japan.

Immediately upon the release by Wikileaks of the 95-page intellectual rights section of the TPP treaty, journalists and grassroots activists alike poured over the documents. Alex Jones and Infowars agreed with WikiLeaks’ and quoted Assange’s observation, ‘Enforcement will be accomplished by “supranational litigation tribunals to which sovereign national courts are expected to defer.” According to the document, the globalist courts can conduct hearings with secret evidence.’

Both independent outlets also noted the similarities regarding internet censorship, ownership and privacy by comparing the TPP agreement to the notorious SOPA legislation. Infowars writes, ‘Aspects of the treaty resemble SOPA and ACTA treaties with draconian surveillance mechanisms. In early 2013, thousands of websites “went black” to show solidarity in opposition to SOPA, or the Stop Online Piracy Act, legislation that seriously threatened the functionality of the internet.’

Last month, the Huffington Post wrote a scathing article about the secret TPP agreement. The account quoted Rep. Keith Ellison (D-MN) who called it the, “largest corporate power grab you never heard of.” Illustrating just how bad for America the TPP trade deal is, one Congressman who has had the rare privilege of seeing parts of the agreement was disgusted by what he discovered. Rep. Alan Grayson (D-FL) reportedly called it, “a punch in the face to the middle class of America…but I’m not allowed to tell you why.”

The Huffington Post report pulls no punches when it says of the multi-national treaty, ‘TPP is bad for working families, because, like nearly every other trade agreement that’s been negotiated by the US in the past 20 years, TPP isn’t concerned with US workers or jobs. Every other nation starts out with jobs and the economy as their priorities. The US unfortunately has a different focus, and looks at trade in terms of national security and global corporate interests, not ensuring the economic well-being of working families.’

Explaining their anti-TPP position, Huff Post gives a few examples of why the trade agreement is bad for America. One cites the fact that some TPP member countries like Vietnam have a minimum wage of $0.25 per hour. The agreement would force US companies to compete with those near slave-level wages. The Post writes, ‘Multinational corporations, in this continuing race to the bottom, will be happy to send jobs to Vietnam and every other subsistence-wage nation.’

The TPP trade deal would also have two seemingly devastating effects on the American economy. As the Huff Post points out, ‘buy American’ incentives and legislation aimed at incentivizing US corporations to bring their jobs back home would be illegal under TPP. Also reportedly disallowed would be a bevy of worker safety rules and environmental protections. Even more frightening, the agreement calls for all member nations to open up government bidding, contracts and services to all nations.

Can you imagine bankrupt municipalities like Detroit and Orange County replacing their pension-burdened police forces and fire departments with thousands of Malaysian or Mexican mercenaries being paid $2.00 per hour because they’re contract workers being employed by foreign corporations not subject to local labor laws because TPP supersedes them all? The authors of TPP can imagine it.

The Post report explains in shocking detail, ‘Foreign firms would be given equal access to bidding on US federal government contracts, and private corporations from other countries would be able to challenge US laws and regulations, including those dealing with telecom, health and the environment, if they think our laws limit their “expected future profits.”’

Also rushing to condemn the TPP agreement after yesterday’s release by WikiLeaks was the internet freedom organization Electronic Frontier Foundation. Their press release title sums up the group’s feelings on the matter, ‘TPP Leak confirms the Worst: US Negotiators still trying to trade away Internet Freedoms.’ In their announcement, EFF warns, ‘The TPP text we’ve seen today reflects a terrible but unsurprising truth: an agreement negotiated in near-total secrecy, including corporations but excluding the public, comes out as an anti-user wish list of industry-friendly policies.’

Speaking to the surprise that the leaked TPP documents include the conflicting arguments of nations in dispute, EFF writes, ‘The text is not final, but the story it tells so far is unmistakable: United States negotiators (with occasional help from others) repeatedly pushing for restrictive policies, and facing only limited opposition, coming from countries like Chile, Canada, New Zealand, and Malaysia.’

The report also describes the heated disagreement between TPP member nations over policing citizens’ internet activities. Apparently, the US and Australia want near-tyrannical enforcement mandates that would require internet service providers to spy on their customers to catch them violating copyright or trademark laws. The majority of participating countries, stubbornly lead by Canada, are asking for more lenient text that would allow each country and each nation’s internet providers to develop their own policing and monitoring infrastructure that best fits their own national policies and laws covering privacy rights and free speech.

The secret TPP negotiations being held in Washington and Salt Lake City will conclude by the end of this month. Whether or not a deal is reached by member nations remains to be seen. WikiLeaks and those who’ve read the leaked documents believe the organization is close to a finalized agreement and only has minor details to work out. US media outlets report that President Obama will designate the TPP treaty as ‘fast track legislation.’ That would force Congress to give the President an immediate up or down vote with no debate, no Amendments, and without seeing the actual text of the agreement. In the meantime, WikiLeaks may release additional sections of the trade deal. Stay tuned.

Turkey bending to US Pressure on Chinese Missile buy

Last US Primary Lead Smelter closing due to EPA