October 19, 2013. The big mystery that was the Affordable Care Act, aka Obamacare, is slowly coming into focus. And Americans are quickly realizing what this publication has said all along. Obamacare is a tax on the people, payable to the world’s corporations. The net result of this version of universal healthcare is that the rich will get richer and the poor will get poorer. 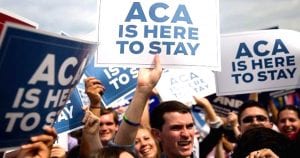 The truth about Obamacare is rapidly coming out. Image courtesy of Breitbart.com.

Some of the ‘pros’, like forcing insurance companies to accept people with pre-existing conditions or to pay legitimate claims, could have been solved with a simple law or by enforcing existing laws against fraud or discrimination. If you’re a regular American, that’s about it for the positives. The ‘cons’, meaning the negatives and not the architects of Obamacare, are so voluminous it’s difficult to compile a complete list.

If you’re a hospital, doctor or medical office – you’re thrilled. No more charge-offs for poor people that can’t pay their bills. Everyone is forced by law to buy insurance. If you’re an insurance company, you’re thrilled too. You’re about to have millions of new customers forced to buy your over-priced product. If you’re the poorest of the poor, nothing changes. You have Medicaid. But good luck finding a legitimate doctor.

If you’re employed and get your insurance through your employer, there’s a good chance you either just got your hours cut to 31.5 per week or you’re about to get a memo telling you the company is no longer paying your monthly premiums. You can either pay the $600 per month premium and keep your insurance or move to Obamacare where you’ll only pay $300, but your deductable will be thousands and every penny comes out of your pocket first. Oh, and none of the expensive procedures or medications are covered with Obamacare.

If you’re the ‘working poor’, you’ll suffer the most. In fact, you may even end up in prison. What happens to people who don’t pay their bills and government fines? Eventually, they end up in jail. In fact, one little-known fact is that ‘debtors’ will soon outnumber ‘drug offenders’ in our nation’s prisons. But that’s an article for another time.

The working poor are the ones who are being forced to choose between having a place to live or having health insurance. They earn just enough to pay the rent and electricity, but not the gas. They don’t go to the doctor unless it’s extremely critical, and then they go to the emergency room and simply never pay the bill. They want to, but if they pay the bill they can’t pay the rent and they become homeless. Numerous studies show that a full 50% of the American people have a net worth of $0 or below. They live paycheck-to-paycheck, if they’re lucky. So, where are they supposed to come up with an additional $100-$300 per month for health insurance that they don’t want and can’t afford?

Recently, two separate reports included lists of little-known facts about Obamacare. Some of them have already come to light with the rollout debacle. But others may surprise you. The first list comes from The Sleuth Journal and is titled, ‘12 Facts about the Epic Obamacare Launch Train Wreck that every American should know’ published 10/15/13:

#1 According to a survey that was just released, approximately 90 percent of the people that have tried to enroll for Obamacare say that they were not able to get signed up.

#3 The Iowa Obamacare exchange has enrolled a grand total of five people in Obamacare at this point.

#4 The Hawaii Obamacare exchange was so bad that the entire site has been taken down and will eventually be relaunched.

#5 Early this week, the Wall Street Journal was reporting that health insurance executives were saying that only “hundreds” of Americans had successfully enrolled through the Obamacare websites so far.

#6 One online database programmer had the following to say about the Healthcare.gov website: “It wasn’t designed well, it wasn’t implemented well, and it looks like nobody tested it.”

#7 The Obama administration received numerous warnings that the launch of the health insurance exchanges was going to be a major disaster. Major insurers, state health-care officials and Democratic allies repeatedly warned the Obama administration in recent months that the new federal health-insurance exchange had significant problems, according to people familiar with the conversations. Despite those warnings and intense criticism from Republicans, the White House proceeded with an Oct. 1 launch.

#8 According to one estimate, it cost more than 93 million dollars to build Healthcare.gov.

#9 When you create an account on Heathcare.gov, you are handing over a whole host of personal information to the federal government which may end up being used for a vast array of different purposes.

#10 According to Politico, there is no way to delete an account once you have created one on Healthcare.gov. Once you finally make it into HealthCare.gov, it’s not clear how you get out. For those who’ve busted through glitches on the federal Obamacare insurance website to create an account, there’s no clear, obvious way for consumers to delete the accounts if they choose — at least not in the current incarnation.

#11 One expert believes that it could take up to two years before the technical glitches are ironed out of Obamacare, “I think it could easily take up to two years before all these things are working working smoothly,” said Lisa Carroll, president of the Mosaic Insurance Exchange and the Small Businesses Service Bureau in Massachusetts. “This is just an ecommerce project of epic proportion,” said Carroll. Carroll said the complicated task of getting all facets of the federal health insurance market to interact with each other correctly is made more complicated by rule changes and clarifications that have to be accounted for by software.

#12 The system is so bad that even CNN’s Wolf Blitzer is saying that the individual mandate should be delayed for a year.

Not to be outdone, Infowars also published a similar list titled, ’10 Ways the Obamacare Train Wreck is screwing the American people’. Published yesterday, 10/18/13:

1. Research by the Manhattan Institute documents how average insurance rate premiums will rise 99 per cent for men and 62 per cent for women under Obamacare. In states like North Carolina, men face a whopping 305 per cent average rate hike, whereas women in Nebraska will be paying on average 237 per cent more.

2. The Obama administration claims that federal subsidies will counteract these rate hikes, but according to health care expert Avik Roy that’s simply not true. “You hear all these excuses from the [Obama] administration — that people are exaggerating the effect of the law,” Roy told CBS News. “But real people are getting notices from their insurers now. My blog is flooded with comments from people saying that they just got a huge premium hike,”

3. The Obama administration lied to the American people when it claimed that existing health insurance plans could be kept. Americans across the country are being informed that their existing health care plans are being canceled because of “changes from health care reform (also called the Affordable Care Act or ACA).”

4. Numerous analysts have concluded that the complete train wreck that was the launch of Healthcare.gov was in fact designed to fail. Online database experts say the system wasn’t even tested before it was launched. Only about 1 out of every 100 people who have attempted to enroll for a health care plan (if they could even access the website in the first place) have been successful.

5. For those Americans who are able to enroll in Obamacare, they are putting their private information at the mercy of hackers and NSA spies. IP addresses, social security numbers, private bank account details, employer details, email addresses and passwords are all being uploaded to a shoddily designed database that is wide open to penetration, and the record can never be deleted.

6. As a result of Obamacare, the general precedent has now been set, thanks to last year’s Supreme Court ruling, that the federal government has the power to force Americans to purchase private goods and services. What’s next?

7. Obamacare provides the IRS with a new justification to hunt down Americans deemed to be evading the new system. While claiming that the IRS will not target Americans who don’t sign up, the administration last year directed $500 million to the IRS “to help implement the president’s healthcare law.”

8. Many small businesses are firing workers and scaling back working hours in a desperate effort to avoid exorbitant Obamacare costs. Whereas giant companies like McDonalds have received waivers, almost half of small businesses said they froze hiring as a result of the Affordable Care Act and one fifth said they had been forced to fire workers. Numerous companies announced last year that they would be laying off hundreds of employees. Many businesses are also reducing the number of hours their employees work in order to avoid Obamacare mandates. According to the Congressional Budget Office (CBO), Obamacare will be a disaster for the US economy, expanding the deficit by billions of dollars every year and “further spiraling America into an uncontrollable debt.”

9. Other small businesses have chosen to close down entirely. A chiropractic clinic in Pennsylvania was forced to close down as a result of receiving reduced payments from insurance companies thanks to Obamacare. CiCi’s Pizza franchise owner Bob Westford pointed out that the additional $221,000 in taxes as a result of Obamacare was $78,000 more than the combined profit of his three restaurants, making the decision to shut up shop a no brainer.

10. The only entities that seem to be benefiting from Obamacare are giant insurance companies, who have all seen their stock prices soarover the last three years. That’s unsurprising given that it was the insurance companies who wrote the foundational document for Obamacare in the first place.

The above list is from Infowars and was edited slightly due to its length.

For the record, we at Whiteout Press didn’t check every one of the above ‘source’ links. Just like you, we appreciate it when news outlets include their sources and for that reason, we left all the links in.