December 3, 2013. Atlanta. (ONN) Two years ago, Gallup released a sparsely reported statistic showing that for the first time, more than half the American people no longer trusted American media outlets to tell them the truth. Building on that ominous warning, we now learn that those same news networks have lost half their viewers in just the last 12 months. 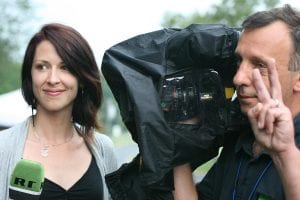 While corporate news outlets report from the perspective of the rich and powerful, Abby Martin (above) and indy news networks like RT are reporting from the view of the people. Image courtesy of Infowars.

What was once a downward trend has rapidly become something resembling a panicked flight from a sinking ship. For years, Americans were blanketed by a blatantly left wing national media industry. Then Fox News, CNBC and a host of other news outlets came along. But instead of giving viewers what they wanted – the honest, unbiased news – these news outlets produced a blatantly right wing newscast. Now, they’re all suffering for it.

While the mainstream media’s plummeting ratings and corresponding ad revenue are all but censored by the news networks themselves, one of Whiteout Press’ favorite independent cable news outlets has been more than happy to report the details. RT News recently gave its audience the shocking ratings numbers the mainstream media doesn’t want their unsuspecting viewers to see.

“CNN is having their worst year ever,” RT reported recently, “Their ratings have dropped 48 percent since November of last year.” The account goes on to show that the ‘celebrity news network’ isn’t alone. “Taking a look at their competitors, MSNBC has dropped 45 percent since November 2012…The Fox News channel only saw an 18 percent drop in viewership since last November.”

Fox News did see a 30% drop in the all-important 25-54 age category. That’s basically the only demographic advertisers care about since that’s the group that spends most of America’s disposable income. The pro-Republican conservative network probably would have taken a larger hit, except it’s pretty much the only game in town. While there are dozens of blatantly liberal networks, Fox News enjoys a temporary monopoly on politically conservative viewers.

Showing just how far ahead Fox News is compared to its left wing competitors, RT News brings us the following viewer numbers from the week of October 28, 2013. This was the week which saw the Obamacare rollout dominate news headlines and media coverage. It should have been a good week for America’s news outlets. But it wasn’t.

During that week, CNN saw its worst weekly ratings in more than a year. That suggests that when an important news incident occurs, Americans go anywhere but CNN for the breaking information. The network only averaged 385,000 total viewers over those days, while MSNBC averaged 683,000. Confirming that the liberals dominate the category, but Fox News dominates the networks, the conservative outlet averaged 2.3 million total viewers during the same time period.

Media stars of the 3rd Quarter

It isn’t just the daily or weekly viewership that is suffering at America’s mainstream media outlets. The bigger picture looks to be almost as bad. When ratings for the third quarter of 2013 were released last month, they generally confirmed a year-over-year drop in viewers. Most media analysts chalk that cyclical ratings drop up to the fact that it’s not an election year. And one review by MediaITE.com focused on each network’s top performer, suggesting that if it weren’t for these respective shows, the media companies would have seen an even greater loss of viewers.

Starting with the reigning king of cable news channels, Fox News finished at #7 among all networks, not just news outlets. That compares to an overall rank of 31 for MSNBC and 34 for CNN. Leading Fox News is its star Bill O’Reilly. His show, The O’Reilly Factor, captured 2.5 million total viewers for the quarter.

While O’Reilly is the king at Fox News, Rachel Maddow is the queen of MSNBC. Her daily segment, The Rachel Maddow Show, lead the network’s lineup with 734,000 total viewers. Financially speaking, her popular and successful show appears to be the most valuable for the network as well. It was MSNBC’s only offering that appeared in the top ten for the 25-54 age group.

Almost humorously, the report showed that CNN had one major victory in the third quarter of 2013. It finished first in the ‘total day’ category. Unfortunately, that’s the group that simply turns their TV on to one channel and walks away for the day. Images of doctors’ offices and auto repair waiting rooms come to mind. If CNN wanted to lead the way in terms of nameless, faceless viewers that don’t exist, they’ve succeeded.

The third quarter ratings also revealed that the star at CNN is still Anderson Cooper. The extremely likable anchor was described in the above report as, ‘the undisputed ratings leader for CNN.’ Cooper’s 8:00pm broadcast was number one for the network attracting 601,000 total viewers. Even more impressive, among the important 25-54 age group, Anderson Cooper’s shows reportedly captured the top four spots among all CNN shows. They include his 8pm offering, the 11pm rerun, AC360 and AC360 Later.

Battle of the business channels

One segment within the overall TV and cable news rankings that rarely gets the attention it deserves is the Business News category. It’s here that generations-old conspiracy theories like the Federal Reserve, the Illuminati, and global Zionism play out before viewers’ eyes on a daily basis. Financial experts and corporate executives that are interviewed on TV today, often are the same individuals indicted or fleeing the country tomorrow.

America’s business news networks have become an almost surreal corporate version of Alice in Wonderland or the Wizard of Oz. It’s here that trillions of US dollars are created out of thin air. Global banking titans like Lehman Brothers are brought down by a vengeful madman. And its here that a non-government official can force the most powerful corporations in the world to buy and sell each other in the middle of the night over a sleepy weekend.

Before going any further, we at Whiteout Press should point out that of the above three business networks, we are fans and viewers of Bloomberg News. Unlike most news networks from any category, Bloomberg’s online articles are as freely available and pop-up-free as they are accurate and informative. The network is one of our most often used sources for statistics and facts. On a personal note, we also just enjoy watching the channel.

From a ratings perspective, Bloomberg unfortunately finds itself trailing its two biggest competitors. Two days ago, the Wall Street Journal analyzed the 3rd quarter ratings numbers and focused on the business news segment. The report revealed both good news and bad news for the dominant player CNBC. The network is still number one in the category with a full 75% of total viewers among its audience. The bad news is that the pro-Republican conservative business channel has seen its ratings among 25-54 year-olds cut by more than half.

The six year-old Fox Business Network appears to be having a difficult time taking market share away from the decades-old standard bearers CNBC and Bloomberg. While not seeing as big a loss in viewers as CNBC, the Fox financial channel has also seen its ratings fall noticeably from last year. By comparison, CNBC’s audience fell from 348,000 to 169,000. Fox Business dropped from 71,000 to 58,000.

The WSJ report says that ratings for the privately owned Bloomberg LP aren’t available. But it’s thought that the network is seeing a similar loss in viewership as the rest of the segment. Unlike the rest of the corporate owned media industry that has suffered due to its lack of objective or substantive reporting, business networks are losing viewers because the country’s financial markets have lost the trust and confidence of American investors. The handful of billionaires in ivory towers who make up the country’s stock market investors these days seemingly aren’t enough to support a 24-hour cable news network.

Then again, both CNBC and Bloomberg would disagree with that theory. They insist, and repeatedly promote to advertisers, that even though the average poverty-stricken American doesn’t watch their networks, the ‘right people’ do. And by the right people, they mean that same small elite group of millionaires and billionaires who control the majority of the wealth and spending dollars in America. Just consider that people like Bill Gates, Beyonce, the Waltons and a thousand privileged others each spend more money in one year than a small American town.

By targeting a select few viewers to sustain their entire news channels, both CNBC and Bloomberg demonstrate one of the failed business models that have harmed the US over the past three decades. The question for business owners and investors has always been, ‘should we sell one million widgets at a $1 profit on each, or sell one widget with a $1 million profit?’ America’s businesses have consistently chosen the latter to avoid the hassles of having employees, production, taxes, and overhead costs. The result has been a loss of jobs, food deserts, a crisis in affordable housing, and a hundred other unforeseen social problems.

But CNBC and Bloomberg both appear intent on making the model work. In CNBC’s case, their audience is made up of the same wealthy powerbrokers that appear as guests each day. In a global economy where the movers and shakers are making up the rules as they go, CNBC often accidentally reveals glimpses into tomorrow’s news. Even the most powerful men on Earth occasionally slip up and reveal their plans for world conquest.

In Bloomberg’s case, their business model is at least a little more blue collar and straightforward. It’s also on track to pass their two competitors in terms of forward thinking and the future. As the WSJ report from two days ago points out, the Bloomberg cable channel has been on the air for nearly two decades and it still hasn’t hit the 10% ratings share or turn a profit. Instead, the network has been seen and used as an accompaniment to the corporation’s main business of supplying financial data terminals to investors, media outlets, investors and traders.

Showing their forward-thinking and touching on a fact we mentioned earlier, Bloomberg is speeding into tomorrow’s internet news programming. We at Whiteout Press often use the network’s online content for source and back-up material, and we always provide a return link to their site as a token of our appreciation. Those return links are adding up. The report reveals that in October, the network saw its online traffic grow to 2.4 million unique US visitors. That’s more than four-times the traffic it saw in the previous year.

In the interest of full disclosure, we want to remind readers that we at Whiteout Press are fans of both RT News and Bloomberg News. While RT is as blunt and blatant as a news network can get when exposing government and corporate corruption, Bloomberg exists in the belly of the beast but is fortunate to have likable anchors who somehow manage to leave viewers with an accurate sense of what’s really going on in the penthouses and palaces of Wall Street and Washington. For that, we appreciate both networks.

The unlucky 7 Animals going Extinct before our Eyes

SEO Expert – What He/She Does?

Melissa Sanchez - October 6, 2022 0
With new technologies, new professions arise. If someone told you 20 years ago that SEO experts will be essential people in online businesses, you...

Tips For Finding The Right Psychologist

A Guide to Buying Garden Fountains

A Guide to a Career In Energy