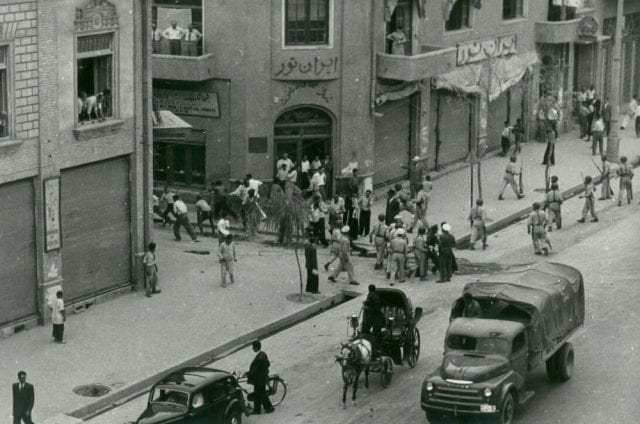 August 21, 2013. Tehran. Apparently, Uncle Sam has been lieing to the American people and the world for 60 years regarding the 1953 overthrow of the pro-democracy Iranian government by the US. The two countries have been pitted against each other ever since. Now thanks to an FOIA response, the US admits it started the hostilities by overthrowing Iran in an unprovoked act of aggression to steal and control the country’s oil.

Surprise – America has been living a lie for over a half century, costing many innocent Americans their lives. But as documented throughout history, most notably in the popular movie Gettysburg, Americans would rather lose the war than admit to the mistake.

If it weren’t for lack of space, this report would recap the entire 60-year US-Iran history since 1950. For every single school book for three generations in America has been wrong, including the suddenly untrue propaganda being thrust upon the current generation of school children today. But we’ll sum it up as briefly as possible.

The website MohammadMossadegh.com presents possibly the best backdrop as he was the pro-West, pro-democracy Prime Minister of Iran, overthrown by the 1953 CIA-led coup. As a child, Mossadegh grew up a member of the privileged and ruling class in Iran thanks to his father’s loyal service to the Shah and his position as Iranian Minister of Finance. At just 15 years old, the son was himself appointed Minister of Finance of an entire province.

At age 21, he was elected to the Iranian parliament as the equivalent of a US Congressman. But the new Iranian Constitution that he wholeheartedly supported during the 1905-1911 democracy movement barred him from serving because he was too young. The new Iranian Constitution replaced the country’s absolute Monarchy with a Constitutional Monarchy just like the government of England. He then traveled to Europe where he was educated at some of the finest universities in France and Switzerland.

Americans might best understand what happened in Iran next by comparing it to what happened to the plains Indians after gold was discovered on their land. In 1901, corrupt Iranian officials sold the rights to Iran’s oil to British investors for 60 years. In 1908, vast reserves of oil were discovered and the Anglo-Persian Oil Company was created, later renamed BP. The British government then purchased a majority ownership of it, giving the UK government total control of Iran’s oil.

In 1919, British officials made another one-sided and corrupt deal turning over control of Iran’s oil, finances and military to the British colonial empire. Mohammad Mossadegh instantly became the face and voice of Iran’s populist opposition when he travelled throughout Europe, including appeals to the League of Nations, demanding an end to Britain’s subversion of his people.

Mossadegh returned to Iran where he was immediately elected a provincial Governor. In 1920, the British overthrew the Iranian regime and installed a puppet Monarchy led by the Pahlavi dynasty and controlled by the West. Opposing this foreign-led occupation of Iran’s Monarchy, he was none the less appointed a post within the government that he opposed. From 1928 to 1940, the British-controlled Iranian Prime Minister Reza Shah led a reign of terror which forced Mossadegh out of politics and into the life of a simple farmer. In 1941, with World War 2 devastating England, the British removed Reza Shah and replaced him with his 22 year-old son.

With a new government in charge, Mohammad Mossadegh was elected with overwhelming popular support to a seat in the new national puppet regime. From his posts as Minister of Finance and Minister of Foreign Affairs, he openly opposed the corrupt 60-year oil deal with the British Empire. He and others pointed out that Iran only received 16% of the proceeds from their own oil, and the British weren’t even paying them that.

Mossadegh led the fight to return ownership of Iran’s oil to Iran, culminating in a very public appeal in 1951. The next day, a coalition of Iranian political parties sponsored legislation that would do just that. It was approved unanimously in both houses of Iran’s government. One month later, Mohammad Mossadegh was elected Prime Minister with 90% of the vote.

The UK sued Iran, arguing that it owned Iran’s oil, not Iran. Mossadegh traveled the world like a rock star to crowds of cheering admirers in cities across the globe, including the UN, where he argued Iran’s case. He pointed out that the British Empire made more in Iranian oil profits in the single year of 1950 than it had paid to Iran in the previous half century combined.

In 1952, Mohammad Mossadegh was named TIME Magazine’s Man of the Year. Capitalizing on his widespread support, he returned to Iran the same year and attempted to end his power-sharing agreement with the young, UK-backed Shah who was still serving as Iran’s Monarch. When the Shah refused to give up control of the Iranian military, Mossadegh resigned his post as Prime Minister.

The day after Mohammad Mossadegh’s resignation, the US and UK forced the appointment of a puppet Prime Minister. The same day, thousands of Mossadegh’s supporters filled the streets where the Shah-controlled military violently put them down with hundreds of deaths. Seeing his Monarchy on the verge of collapse, the Shah reluctantly gave in to his demands and appointed Mossadegh both Prime Minister and the Minister of Defense.

On the exact same day, the world court in The Hague ruled in favor of Iran in its suit against the British Empire over control of Iran’s oil. The UN also ruled against the British. With victory after victory on behalf of the victimized Iranian people, Mossadegh was haled as a hero of not just Iran, but of the entire Middle East. As detailed by MohammadMossadegh.com, he immediately instituted an Iranian government based on freedom, democracy and justice.

Mossadegh created an independent court system. He ordered democratic elections. He protected the rights of all religions and all political parties. Decades ahead of his time, he even fought for the rights of women, workers and the poor. Proving he was still pro-West and pro-freedom, Mossadegh rebuffed the Soviet Union when it attempted to forge an alliance with Iran after the UK and US mistreatment of his country.

Determined to get its hands on Iran’s oil, from August 15-19, 1953, the CIA launched Operation Ajax. Using massive amounts of money to buy and arm enough fighters to back the Shah, a violent, bloody and successful coup was staged and Mossadegh and his government were removed from power and replaced with the tyrannical dictatorship of the CIA-funded Shah of Iran. While other members of his pro-democracy government were executed, Mossadegh lived out the remainder of his life under house arrest.

Flash forward to August 19, 2013 – two days ago. Mark that day in the history books, because it’s the first time the US has ever publicly acknowledged its secret and subversive role in the overthrow of Iran’s pro-democracy government and replacement with a brutal military dictatorship. The documentation comes from a history-changing announcement by George Washington University on Monday.

The university’s National Security Archive admits that it knew the US government was lieing all these years, but it also reveals that for the first time, the CIA has released official documents confirming it. The still heavily redacted archives show the CIA was responsible for the overthrow of Iran’s pro-democracy government and replacement with a brutal, tyrannical dictatorship, not to mention the theft of its oil and oil wealth.

Since none of the original CIA files and documents from the era survived, the main historical archive includes a 1970 CIA report that explains the Agency’s role. According to the university, that report and a one-foot-high stack of classified CIA documents are all that remains of the US government archive of the Iranian coup. For decades, scholars and individuals alike have been submitting Freedom of Information Act requests for the details, with no luck…until now.

With the shocking release of the CIA documents, the researchers from George Washington University and the National Security Archive also called on American officials to come clean and release the full dossier of secret documents covering the CIA’s 1953 overthrow of the Iranian government. The authors insist, “While the National Security Archive applauds the CIA’s decision to make these materials available, today’s posting shows clearly that these materials could have been safely declassified many years ago without risk of damage to the national security.”

Agreeing with this column’s sentiment that our government has been purposely lieing to generations of American school children, the GWU/NSA announcement contemptuously remarks, “There is no longer good reason to keep secrets about such a critical episode in our recent past. The basic facts are widely known to every school child in Iran. Suppressing the details only distorts the history, and feeds into myth-making on all sides.”

The previously secret CIA documents were posted to the George Washington University website on Monday. The school’s researchers also include two other historically relevant files that compliment the just-declassified CIA documents. Together, they show the US and UK’s precarious role in the overthrow of Iran’s democracy, replacement with a brutal US-controlled dictatorship, and the resulting Islamic Revolution that America faces off with today.

View the full assortment of documents at www2.gwu.edu.