Home Uncategorized What is McDonalds McRib Sandwich made of? 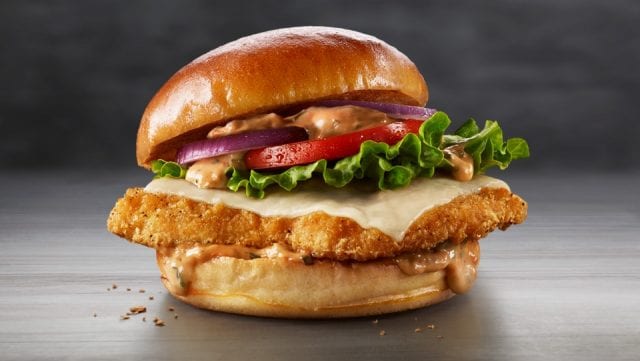 December 18, 2012. (ONN) The McRib sandwich is back at McDonald’s again. A once per year menu item, it’s become a cult classic among the fast food chain’s customers. How a simple sandwich becomes a rock star is formula McD’s wishes they could recreate. Reminiscent of the Grateful Dead and their hordes of fans following them from city to city, the McRib has its own army of nomad followers. But what is a McRib actually made of and how is it made?

Pig intestines are one of the main ingredients in a McDonald’s McRib sandwich.

Critics argue that if the McRib were an everyday item on McDonald’s menu, it would be a money loser. They insist that it’s McDonald’s genius marketing campaigns that have made the sandwich an icon of fast food restaurants. As one example, in 2010 McD’s launched an ad campaign titled, ‘Save the McRib’. It asked consumers to go to the company’s website and sign a petition to save the seasonal sandwich. Of course, the effort failed just as planned and was only a trick to get consumers to go to the site. But it cemented another layer of loyalty among the McRib’s cult following.

Another strange coincidence, or possibly a genius profit-loss strategy, is the fact that the McRib isn’t really seasonal. Nobody ever knows when the temporary sandwich will be reintroduced again, or for how long. But one researcher has been arguing for some time that when it comes to pork, McDonald’s isn’t a restaurant, it’s a commodities broker. When the largest restaurant in the world orders a bazillion pounds of pork, it affects global pork prices. The researcher stumbled onto his answer when he overlayed a chart of McRib releases with a chart of pork prices on the commodities market. What he found out is that McD’s smartly releases the McRib sandwich when global pork prices are at yearly or multi-year lows.

water
pork
tomato paste
distilled vinegar
spices (although the exact spices are not listed)
onion powder
garlic powder
chili pepper
beet powder
If these were the only ingredients in a McRib sandwich, consumers would be lucky. But these are only the ingredients that most consumers would look at as standard, healthy and acceptable items to give themselves and their children. Unfortunately, the McDonald’s sandwich contains roughly 73 ingredients.

Without the training and education of a chemist or registered dietician, this author can only list many of the remaining ingredients as detailed by the corporation. And as mentioned above, McDonalds doesn’t make it easy. Their ingredients list merges all items including both full sandwiches, like the McRib or Big Mac, with generic ingredients such as ‘100% Angus Beef Patty’.

As an example, each of those ingredients has its own ingredients list. And McDonalds doesn’t separate them on its allegedly helpful disclosure. Instead, the corporation published one, miles-long list with menu choices, ingredients (like mustard), and then the base ingredients that are used to produce each item (such as all the things that go into the mustard).

From the looks of the list, it was either created by a clown, like the restaurant’s mascot Ronald, or by some madman at an ad agency. With all three types of items mixed in together – sandwiches, their ingredients, the ingredients’ ingredients – the list appears to be in alphabetical order, but it isn’t.

A consumer who wishes to find out what’s in the food they’re buying from McDonalds must first find their menu item, like the McRib (found under the letter ‘M’). Then, they must find each individual ingredient such as pickle slices (found under the letter ‘P’). There, they will be shocked to find out that even a simple pickle slice from McDonalds contains no less than 10 ingredients of its own. And the really funny part is, nowhere on the less-than-helpful McDonald’s ingredients page does it say what items go on any of the sandwiches like the McRib. Customers must actually search elsewhere or Google it just to find out what items they must look up.

The Humane Society of the United States released a video at the end of 2010 showing the horrifying conditions from which McDonald’s gets its McRib pigs. Supplied by the largest pork producer in the world, Smithfield Foods, the pigs are shown to be kept in cramped, overcrowded crates, unable to move more than an inch, with bleeding skin sores, lesions and stab wounds. Workers manhandle, abuse and torture the animals for gruesome pleasure, while government inspectors look the other way as tainted and infected meat enters the food supply via McDonalds.

Thanks to the undercover video, all of those incidents and more are caught on tape. Ironically enough, the name of the Smithfield Subsidiary where this undercover video was shot is titled, ‘Murphy-Brown’ – the namesake of the fiery television investigative journalist played by Candice Bergen who would never have stood for such inhumane treatment of animals. This award-winning video from the Humane Society and accompanying website includes:

Breeding females packed into ‘gestation crates’ as tight as sardines. With the mothers being stabbed from crate protrusions, piglets born too small fall through the bars of the crate onto manure piles on the ground below.
Showing signs of panic and insanity, the pigs bite at the bars until their faces are covered with their own blood.
No veterinarian was ever observed on the premises by undercover investigators and videographers.
One clip shows a Smithfield manager lance a basketball-sized lesion on the neck of one pig with an unsterilized shank, only to tell employees to ignore it and put the pig back in with the rest of the population.
Another clip caught Smithfield Foods employees repeatedly stabbing a dieing or dead pig in the back of the neck to get it to move on its own.
Three times while under surveillance, pigs were discarded into dumpsters, still alive, after having been shot in the head with a high-powered bolt gun designed to render the animals unconscious.
Smithfield Foods employees mishandled piglets, tossing them around and into carts like they were basketballs.
Along with the video, the Humane Society of the United States also included a statement from the group’s CEO Wayne Pacelle. “If this is the best that Smithfield can do, it is evident that there are terrible problems in the nation’s pig industry,” he remarked. The Humane Society also points out that Smithfield Foods, based on the US east coast, uses processing and slaughter methods banned by numerous western states, and ingredients in its McRib sandwich banned in Europe and Australia.

As detailed by TIME Magazine, the McRib sandwich contains such banned items as Azodicarbonamide – a flour-bleaching agent used to bleach plastics, gym mats and shoes. The UK classifies the chemical as a ‘respiratory sensitizer’ that causes asthma.

This list of McRib sandwich ingredients is the result of an amateur search through McDonald’s bizarre outline of ingredients. It’s worth mentioning that this is far from a full list. While the restaurant details the sandwich’s main ingredients, it does not delve one level deeper and tell us what ingredients are in the ingredients’ ingredients, if that makes sense. For example, as an ingredient in the McRib sauce, they list ‘spices’, but don’t say what ‘spices’ that includes. There are other items as well with the same missing information.

The final horrifying ingredient of the McRib sandwich falls under the item McDonalds calls ‘McRib Pork Patty’. According to the ingredient list, the food is made from ‘pork’. But what part of the pig does it specifically come from? According to Yahoo Finance and the Business Insider, ‘a mixture of tripe, heart, and scalded stomach, which is then mixed with salt and water to extract proteins from the muscle. The proteins bind all the pork trimmings together so that it can be re-molded into any specific shape — in this case, a fake slab of ribs.’ Mmmmmm, yummy.

Your author had to literally break out the giant, wall-mounted white board to compile this list from McDonald’s supplied ingredient list. With that in mind, here are the ingredients that make up a McDonald’s McRib Sandwich (compiled from the McDonalds website):

Well, there you have it – all the ingredients in a McDonald’s McRib sandwich. Although, even with the detailed list above, this author still has some questions. It would be nice to know exactly what plants are used to generate ‘natural smoke flavor’, as well as other unexplained items. And would someone please tell me what ‘alum’ is?

We’ll do one better. We’ll tell you what alum is. According to numerous websites, ‘alum’ is the abbreviated version for a number of aluminum sulfates, most commonly potassium aluminum sulfate. ‘Alum’ is used in both foods as well as many household products. In food, it’s typically used to add a crisp texture and can usually be found in baking powder and some pickled products. Non-edible items including alum often include modeling clay, Playdough, wrinkle cream and industrial dyeing.

WhiteOut Press - June 28, 2022 0
Captured Spy Drone is disguised as a real Bird By Mark Wachtler This camera-equipped spy drone crashed in Somalia and was captured by local residents.July 27,...