Home Entertainment What Is IPTV?

But to understand it, even more, we have to touch on non-IPTV and how that works. Broadcasting television through a satellite or cable is done through signals which viewers receive. The downside to this is that you can only watch what its currently being broadcasted. Unless you have some sort of recording device that dictates what’s on, you can only watch what’s available to you with non-IPTV.

On the other hand, internet protocol television works completely differently. Instead of sending signals through a satellite, IPTV sends movies, shows, and sports events through an internet connection.

Simply put, IPTV works very simply as the many popular streaming services such as Netflix, Hulu, and others.

What do You Need for IPTV?

Televisions are not best equipped for IPTV. Although Smart TV’s can be used with IPTV, they are just very poorly designed for it. A TV’s primary role is to display whatever the receiver transmits to it. TV’s can also be paired with other devices through HDMI cables and wireless connection (in the case of Smart TV’s).

But the best and most effective way to set up IPTV is to use a Set-Top Box. A Set-top-box effectively translates everything you receive through the internet into a format suitable for your TV.

A computer or laptop is also a great method of translating IPTV to your TV because they don’t require a translator to translate what you’re viewing. The TV does and we solve this problem by connecting your PC or laptop to your TV with an HDMI cable.

How Does IPTV Work?

IPTV support three different formats, which we’ll take a closer look at them.

Video on demand is a type of streaming service that displays whatever you demand from it. Movie streaming services such as Netflix, HBO, Hulu, Amazon Prime, and others, are operating on this method. We select the content we want to view and the service gives us what we demand. According to iptvpoint.com, video on demand is much more popular than standard cable or satellite TV.

Another popular example of IPTV comes in the form of “catch-up TV”. This form of media comes from popular broadcast networks that allow users to watch shows they’ve missed.

Apart from streaming movies, shows, and various other entertainment media, you can also watch shows live through IPTV. The biggest use of Live IPTV is for people to watch sporting events. Since everyone can stream last night’s episode of Game of Thrones and still be satisfied with the outcome, we can’t really say the same about the Patriots, can we? Live IPTV is very popular as it allows you to watch any sporting or show event live by streaming it right on your phone. 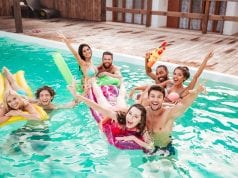 How to Throw the Best Summer Pool Party Ever