December 2, 2012. San Antonio. (ONN) In one of the first battles in the nation over the process of ‘chipping’ children against their will by attaching or implanting an RFID chip to their bodies or ID cards, a Texas high school student stood up to the school, school board and even government officials, and won her right to not be chipped. While the temporary restraining order preserves the girl’s civil rights for now, it is a clear sign that the program to microchip all Americans is underway. 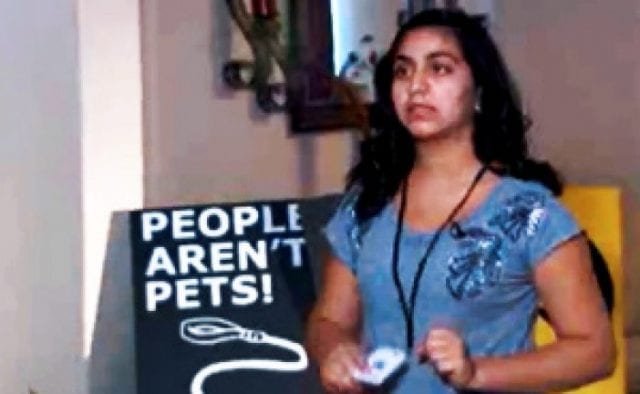 Beginning with start of the 2012-2013 school year, two San Antonio schools began pilot programs to RFID chip each and every student enrolled at the two respective schools. Government officials and school board administrators touted the technology for its time and cost-saving benefits. According to authorities, the RFID chips allow the school to take attendance for each class in a time frame of about one second. It’s also assumed to be completely accurate, but if anyone knows how to get around school administrators, it’s teenagers.

Officials also announced that the microchip implementation would help provide more funding for the schools because it would keep more accurate attendance records. This reason proves to be somewhat suspect however, since more accurate attendance records would lead to less funding, not more. The RFID chips would merely confirm that already-counted students no longer attend school, costing the district education funding.

After two months, and out of all the students at both San Antonio schools, only one student stood strong and refused to be ‘chipped’. Andrea Hernandez is an honor student at John Jay High School, who for two months refused to participate in a program where all students are forced to carry a new Student ID with their own personal RFID microchip embedded within it.

“I had a teacher tell me I would not be allowed to vote because I did not have the proper voter ID,” the teenage Hernandez told reporters, “I had my old student ID card which they originally told us would be good for the entire four years we were in school. He said I needed the new ID with the chip in order to vote.”

Last week, school officials decided they were finished fighting with the stubborn student and officially threatened to expel her from school this coming week if she continued to refuse the school ID with the RFID chip. It only took 48 hours for Andrea’s parents and national civil rights organizations to take action in her defense.

On Wednesday, a local Judge issued a temporary restraining order on Andrea Hernandez’ behalf against John Jay High School and the Northside Independent School District it belongs to. The court ruled, preliminarily at least, that the school principal’s mandate to make the RFID chips a requirement for all students was a violation of the girl’s Constitutionally guaranteed right to freedom of speech, as well as her freedom of religion.

One of the organizations joining the fight to stop the forced chipping of the American populace is the Rutherford Institute. Their attorneys have been involved in the Andrea Hernandez case, arguing on the girl’s behalf.

“The court’s willingness to grant a temporary restraining order is a good first step,” Rutherford Institute President John Whitehead was quoted by RT America saying, “But there is still a long way to go – not just in this case, but dealing with the mindset, in general, that everyone needs to be monitored and controlled.”

“Regimes in the past have always started with the schools, where they develop a compliant citizenry,” Whitehead’s statement continued, “These Student Locator programs are ultimately aimed at getting students used to living in a total surveillance state where there will be no privacy, and wherever you go and whatever you text or email will be watched by the government.”

Summing up the concerns of everyday parents, the Institute’s John Whitehead goes on to warn, “There is something fundamentally disturbing about this school district’s insistence on steamrolling students into complying with programs that have nothing whatsoever to do with academic priorities and everything to do with fattening school coffers…It’s a sad day in America when school officials deny someone an education simply because she stands up for what she believes in.”

RFID chips and the Mark of the Beast

Rightly or wrongly, the teenage student freely admits that she believes that RFID chips are in fact the Biblically prophesied ‘Mark of the Beast’.

For two decades now, a quiet but growing segment of the population has become frighteningly concerned over the government’s obsession with pairing every single American citizen with a microchip and a unique ID number. They suggest, and some insist, it is nothing short of the Biblical warning from the book of Revelation about the ‘Mark’ and ‘Number’ of the Beast.

The specific Biblical passage many are referring to is familiar to most of us. It’s been a riddle and mystery for over a thousand years to Christians and a favorite subject matter for everyone from rock-n-roll bands to Hollywood. Just as we printed in the above Whiteout Press article and report, here are two versions of the Biblical quote – one from Catholic Bible and one from the Protestant King James version (from Are RFID Chips the Number of the Beast?):

Revelation 13:16-18 – ‘And he causeth all, both small and great, rich and poor, free and bond, to receive a mark in their right hand, or in their foreheads: And that no man might buy or sell, save he that had the mark, or the name of the beast, or the number of his name. Here is wisdom. Let him that hath understanding count the number of the beast: for it is the number of a man; and his number is Six hundred threescore and six.’

Apocalypse 13:16-18. ‘And it will cause all, the small and the great and the rich and the poor, and the free and the bond, to have a mark on their right hand or on their foreheads, and it will bring it about that no one may be able to buy or sell, except him who has the mark, either the name of the beast or the number of its name. Here is wisdom. He who has understanding, let him calculate the number of the beast, for it is the number of a man; and its number is six hundred and sixty-six.’

A Texas court is scheduled to hear preliminary arguments in the case this week. Lawyers for the high school student, Andrea Hernandez, say they will argue that forcing all students to possess an RFID chip at all times while at school is not only a violation of their right to freedom of speech, but to freedom of religion as well. For her part, Hernandez insists that truly is one of the reasons she’s refusing to accept the chip. She believes it is the Mark of the Beast that her religion has warned her about for a millennium.