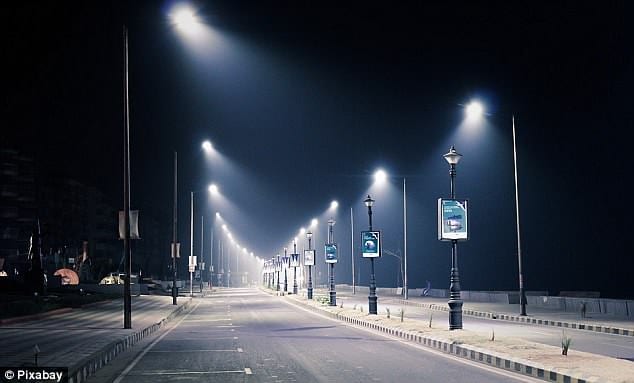 November 16, 2013. Las Vegas. If Wall Street, the federal government and America’s local city officials have their way, every streetlight in every major city will be listening, watching, recording and transmitting all activity in its proximity. Who is this data transmitted to? Government authorities and Wall Street brand managers of course. 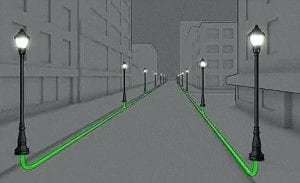 The streetlights watch, listen and record everything. Image courtesy of the Daily Mail.

The business pitch is perfect – replace your aging street lights with our new LED lights. Cities can increase output by 50% while cutting their costs 25%. What’s more, the lights come with digital signage that can run custom ads or government announcements, bringing in advertising revenue to America’s bankrupt cities. And best of all, each street lamp has its own mini, remote controlled computer, video camera and microphone. So the government can spy on its citizens anywhere they have street lights, and the people never even know.

One of the first major cities to have signed on to replace their old street lights with the new spyware lights is San Francisco. In January, the San Francisco Public Utilities Commission announced it was making plans to replace the city’s 18,000 street lights. As reported by RT News, a Swiss company named Paradox Engineering has already begun testing 14 systems there and officials have announced they are taking bids from other vendors to equip the entire metro area.

According to San Francisco’s ‘request for proposal,’ the city, ‘also plans to install an integrated wireless communications monitoring and control system. Ideally, the wireless system will accommodate other wireless devices, unrelated to street lighting, in a common wireless system mesh network.’ City leaders want their public utility infrastructure to be able to listen, watch, record and then transmit the audio and video from one unit to the next and to a central command post.

The report states that San Francisco first began installing public cameras in 2005. It also mentions a USC study that found the cameras did nothing to reduce violent crime. The California ACLU’s Nicole Ozer was quoted in 2009 criticizing San Francisco’s public camera monitoring program saying, “Precious public safety dollars need to be spent on solutions that actually work to reduce violent crime, like community policing, intervention programs and improved lighting, not on more ineffective and intrusive cameras.”

The latest city to join the trend and begin testing these ‘smart’ street lights is Las Vegas. Last week, local news outlets began airing segments detailing the city’s new lighting system. Being ‘sin city’, many have fixated on the ability of the street lights to be able to play music, make commercial announcements, and even display ever-changing commercial ads on video signage. The system seems perfect for America’s casino mecca. But critics of the city’s plans have described it as, ‘big brother on a pole.’

In fairness to some city officials, not all are obsessed with spying on citizens. Some are simply excited about new technology that can make Vegas even more fun. CNET quotes Neil Rohleder from the Las Vegas Public Works Department saying, “We want to develop an experience for the people who come downtown.” The outlet also quoted the Public Works Director Jorge Cervantes attempting to quiet critics’ fears, “Right now, our intention is not to have any cameras or recording devices. It’s just to provide output out there, not to get any feed or video feed coming back.”

Others see value in the systems too, such as announcing Amber Alerts or tornado warnings. The company that is providing the spying street lights specifically targets college campuses in their corporate marketing materials. Imagine if the unassuming street pole on campus was watching and listening as someone was being attacked. In seconds, the pole’s speakers transmit a human voice at some control center yelling at the perpetrator to stop and that the police are on the way. The poles can also be equipped with a red panic button that instantly calls 911. Those are some fine selling points.

But then, there are those who see these smart street lights as a tool of tyranny. They see them announcing mandatory curfews and showing mobs of slowly marching political prisoners the way to the concentration camps. The manufacturers’ also promote the fact that the light’s computers have voice analytics capability, leading to all sorts of specultation.

That’s the brand name of the interactive lighting and monitoring system being installed in Las Vegas by its manufacturer Illuminating Concepts. Curiously, the Intellistreets web site doesn’t openly bill itself as an espionage corporation. Its tag line is, ‘Intellistreets is the only wireless information and control network for Sustainability, Security and Entertainment.’ It also calls itself, ‘The only street light system with embedded emergency call buttons and two-way hands free communication.’

Alex Jones and Infowars have been warning viewers and listeners about the Intellistreets spying system since 2011. In an article published this week, the outlet again sets its sites on the spying aspect of the new municipal lighting systems. They remind Americans that these street lights have highly sensitive sensors that, according to the company, “assist DHS in protecting its citizens and natural resources.”

Delving even deeper, the computers inside each street light contain RFID readers. That means they can read any person’s purse or wallet as they walk by, scan the RFID chip in their credit card, cell phone or wherever else they’re hidden these days and enter that information into your file inside the Department of Homeland Security’s massive database. The company also says Las Vegas isn’t alone in installing these smart lights. They’re also being installed in, ‘Chicago, Detroit, Auburn Hills, Asbury Park, and at stadiums like the Mercedes Benz Superdome in New Orleans.’

If Las Vegas and San Francisco are installing ‘smart poles,’ then other cities have the ‘dumb poles.’ A separate report from Infowars details how 70 cites around the country already have ‘gunshot detectors.’ They are just like the Intellistreet street lights, except they do little more than listen for gunshots, allegedly. A recent case in New Bedford, MA recently revealed that the sensors are equipped with audio and video recording devices. That was exposed during a shooting when audio of the individuals’ conversation was admitted into evidence. It was recorded by the ‘gunshot detector.’

It all comes back to Trapwire

Jeremy Hammond, the most famed and acclaimed hacker from Anonymous, was just sentenced to 10 years in prison yesterday. His crime was breaking into the computer systems of the mercenary spy corporation Stratfor. What he discovered has shed a light on just how spooky, sophisticated and far the US government and its hired corporate partners have come to bringing the ancient all-seeing-eye to life.

One of the millions of documents Hammond stole and published was a summary of the firm’s super-secret, government-funded time travel program called Trapwire. It’s billed as the only surveillance profiling system that can predict where and when terrorist acts will be committed, and who will commit them, before they happen.

The massive computer program stores the audio, video and still pictures from every camera and microphone in America it can gain access to, and soon the entire Earth. It seems obvious that with the help of the CIA, the company either gets the feeds legally or just steals them. Imagine how many devices there are that transmit audio, video or data. They include all the above municipal street light programs, store security cameras, private computers, satellite imaging, public and private security systems, cell phones, game consoles, and a hundred other devices nobody ever thinks of like their car and TV set.

The future is here and it will blow your mind. For the best impression of how the program works, watch the Denzel Washington and Val Kilmer movie ‘Déjà vu.’ That’s the secret public surveillance system they have in place and are desperately trying to envelop the entire nation with.

For those that haven’t seen the movie, a domestic terrorist blows up a ferry full of people and the federal government enlists its super secret program to find out who did it. Imagine you’re sitting in a small room full of computer and television monitors. You can call out any time and place in America and the screens and speakers will instantly show you what happened on that precise spot. Even better, since the audio and video is achieved using every available camera and microphone, it allows you to move around just like Google Earth or the game Grand Theft Auto, except its live and you can watch and hear any time and place you want from almost any angle.

Thanks to the massive databases involved, you can also name any individual and the screens will instantly show that person, following him or her around and providing all the audio along the way including car horns, birds singing and conversations. The angle of the view and the strength of the sound go in and out due to the moving target and the computers having to constantly switch to the next street light, ATM machine, red light camera, store surveillance camera, or even the unsuspecting teenage girl and her laptop at the bus stop.

So while the news about Las Vegas, San Francisco and dozens of other cities installing these smart street lights sounds like they could some day be used by a tyrannical government to spy on the people, the truth is they’re already doing it. The street lights, and the thousands of drones currently flying overhead, are just more cameras and microphones to fill in Trapwire’s global monitoring system.

Trapwire, Thought Crime and Spying on each other