This information has been floating around the world since the Protestant Reformation began in 1517. In reality, it was probably distributed long before then. This particular pamphlet was obtained by Whiteout Press in 1993. It was anonymously printed and distributed with a small section for local activists and believers, regardless of their religious affiliations, to insert their own local contact information. The belief that the Pope of the Catholic Church is the antichrist is as old as the Bible itself. Theologically, it’s still the belief of millions of Protestants the world over. For its historical relevance, here is the actual pamphlet from those who believe the Pope truly is the antichrist.

The number 666 is a symbol that has been feared by people around the world for centuries. They believe it represents the Satanic ‘Anti-Christ’ and famous ‘mark of the beast’. This mark of the beast is prophesied to come and be forced upon the people of the world. It is said this mark will either be placed in the right hand or in the forehead of an individual, in order for that person to be able to buy or sell anything. In Revelation 13:16-17, it states:

“And he causeth all, both small and great, rich and poor, free and bond, to receive a mark in their right hand, or in their foreheads. And that no man might buy or sell, save he that had the mark, or the name of the Beast, or the number of his name.”

Numerous people today are very concerned over the ‘New World Order’ – believing it is the name for the long ago prophecied ‘one world government’ which will affix this ‘mark of the beast’ in order to keep track of and take control over the lives of all people everywhere.

In the Book of Revelation, there are certain scriptures which can be a little confusing at times because of the way it is worded. Sometimes John seems to portray the Beast as a single individual and at other times as a giant corrupt and evil one world, economic, political, social and religious system – the New World Order, or known in ancient times as ‘The Great Babylon’.

Since the Catholic Church is the largest single religion on Earth, doesn’t it make sense that it is somehow tied into this New World Order, or ‘The Great Babylon’? In Revelation 17:7, it says that a woman, the harlot or whore, will be carried upon the Beast. It is the belief of many that this ‘harlot or whore’ is a symbolic name for the Catholic Church. Therefore, in order for the prophecy to be fulfilled, the Catholic Church will strive for a top position in this plot and will be used to help lead the people into the New World Order’s rulership and their acceptance of the Satanic ‘Mark of the Beast’.

“Here is wisdom. Let him that hath understanding count the number of the Beast, for it is the number of a man, and his number is six hundred and sixty-six.”

Please notice that it states that this number 666 is not the actual ‘mark’ of this beastly one world system. Instead, it is the actual ‘number of a man’! Who is this man and how do we find out? In the thirteenth chapter of Revelation, and the seventh chapter of Daniel, this man was to come from the little horn (symbolic of religion) and he would be the main voice and power coming out of it.

If the Catholic Church, the largest religion in the world, is a willing participant in the creation of the New World Order, then naturally the Pope, who is the head of the Church, fulfills this prophecy of who the man is. But this still leaves the question of how we associate him with the number 666?

Revelation 13:17 is the clue. It states that the number is from his name. In doing some research, we find that this was pointed out as far back as 1612 in a book called ‘Roman Antichrist’ by Andreas Helwig. Helwig explains that the Pope’s title, VICARIUS FILII DEI, appears on the Pope’s crown and means literally, ‘God himself in the flesh’.

Numeric values for each letter totaled together for each word: 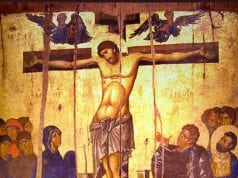 When Was Jesus Really Born