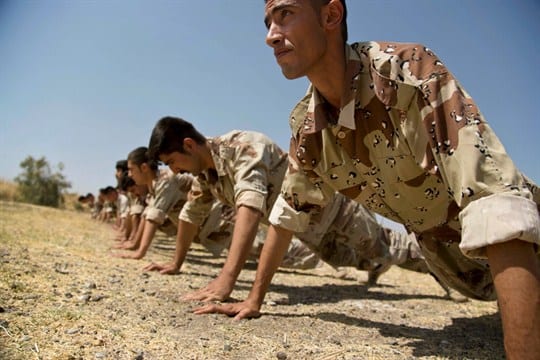 July 21, 2011. Baghdad. Three days ago, Iranian Revolutionary Guard troops crossed the border into Iraq and launched a major military offensive against the Iraqi Kurds. The first announcement came out on July 18 via Iran’s state news agency.

Since then, little word has escaped from the semi-autonomous region of northeast Iraq that once was Kurdistan. Iranian authorities report that they have captured three rebel Kurdish military bases. They also caution that the fighting has been ongoing for days and Iranian troops are still engaged.

From AP reports, the Iranian News Agency announcement quoted Revolutionary Guard Colonel Delavar Ranjbarzadeh as saying, “Three bases in Iraqi territory were providing assistance to the terrorists. All the bases have fallen into the hands of our forces.” He went on to say that the Kurds had suffered, “a heavy and historic defeat.” Iranian authorities also confirmed the presence of 5,000 troops along the Iraq border, many involved in the fighting.

Kurdish rebels from the group PEJAK (Party of Free Life of Kurdistan) immediately confirmed the military assault, but not the reported results. The Kurds also released details showing a one-sided victory against their Iranian invaders. AP quotes PEJAK sources who report killing 53 Iranian soldiers while only losing 2 on the Kurdish side.

The following day, the Pro-Kurdistan group SupportKurds.org began reporting unnamed eyewitnesses. In their moment by moment account, the group reported:

“According to eyewitness accounts and PJAK, there have been three days of clashes in four different sites inside the Iraqi border and the border between the Sipah Pastaran Army belonging to the Islamic Republic of Iran and HRK Guerilla forces belonging to PJAK. 180 Iranian sipah pastaran soldiers were killed, including 2 high ranking commanders, and many more were wounded. Also during the clashes, 7 PJAK guerrillas lost their lives and 4 others were wounded.”

“According to eye witnesses in the cities of Urmiye, Piransehir and Serdes in Iran, hospitals in these cities have been closed to civilians due to the high number of wounded Iranian soldiers coming in during these three days of clashes. They say that there are soldiers speaking fluent Turkish within the Iranian Army deployed in the area.”

The Kurds are no stranger to attack and slaughter. They are the same people Saddam Hussein attempted to exterminate. On March 16, 1988, Iraqi forces turned away from their war with Iran and launched a full-scale chemical weapons attack on their own citizens, the Kurds. As many as 5,000 were killed, 10,000 injured, and thousands more would later die from complications and the effects of the attacks.

Not as devastating, but just as deadly, both Turkey and Iran have crossed the border into Iraq to attack the Kurds on numerous occasions. Calling Kurdish independence groups terrorists, both of Iraq’s neighbors have launched attacks on Iraqi soil while the US-backed Iraqi government continues to look the other way.

AFP reported two years ago, Iranian troops clashed with Iraqi Kurds at a similar level as this week’s attacks. In that engagement, Iranian troops lost 18 men to the Kurds’ 8 before Iranian helicopters swooped down to turn the tide of battle.

Who are the Kurds?

According to the Kurdish Institute in Paris, in 612 BC, the Medes, the Kurds ancient ancestors, founded their empire. According to the Institute, this isn’t just the year their nation achieved the status of empire, it’s actually the first year in the Kurdish calendar. Right now, Kurds are living in the year 2624. It was in that year twenty-six hundred years ago, that the Kurds conquered the Assyrian empire and reigned over the whole of ancient Iran.

Around 6 BC, the Kurds fell under the rule of the Arab-Muslim invasion, of which the Kurds were neither. Resisting assimilation and fighting Arab tribes for centuries, it was the year 837 when a Kurdish lord named Rozeguite founded the sovereign Kurdish town of Akhlat. Three hundred years later, the Turks would take their turn to conquer the Kurds. In fact, the Kurds were among the soldiers fighting Christian Crusaders under the leadership of the historic Saladin.

Retaining their own language, culture and independence, by 1200 Kurdistan was again a semi-antonymous nation. The Kurds even successfully fought off the Mongolian invasion along with their Muslim neighbors. In 1500, the Kurds were forced to choose sides between the Ottoman Turks and the Persian empire. With a promised autonomy under Turkish alliance, the Kurds went to war against the Persians, modern day Iran.

Following the global example from America’s war for independence, followed immediately by the French Revolution, the Kurds fought repeated revolutions from 1830 to 1881. With the Ottoman Turks on the losing side of World War 1, the victorious allies, America, France and Britain, recommended the international recognition of an independent Kurdistan. Unfortunately, local armies were more powerful than international recommendations and Kurdistan was swallowed up by its neighbors.

In 1925, the League of Nations officially eliminated the country of Kurdistan. It divided up the Kurds’ land between four neighboring countries – Turkey, Iran, Iraq and Syria. And that is how it’s remained ever since. To quote the Kurdish Institute in Paris, the Kurdish people are a victim of their geography and of history.

Still today, Kurdish fighters refuse to give up the struggle for freedom and independence. In the West, as well as the East, they’re labeled as terrorists. Preferring to be thought of as ‘freedom fighters’ and with numerous rebel groups fighting for their cause, the Kurds soldier on, a people without a nation.

Subscribe to Whiteout Press – only 12 emails in your email Inbox. It’s FREE and you can unsubscribe at any time. Simply enter your email address above and hit ‘Submit’.