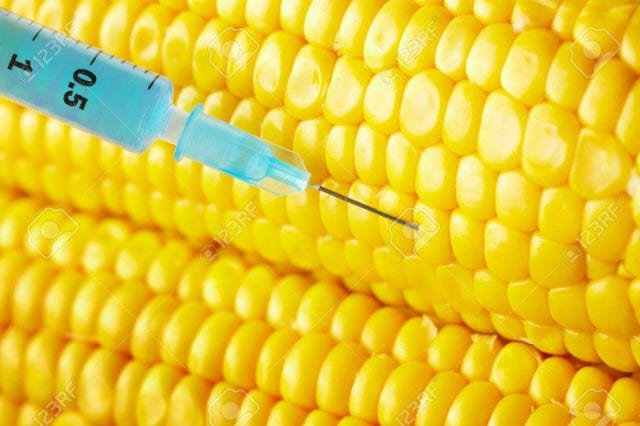 December 18, 2013. Fujian. (ONN) China has slammed the door on the fifth US shipment of GMO corn in four weeks. All together, the rejected imports total roughly 500 million pounds of genetically modified American corn. And while the Chinese defend their actions because the GMO’s are banned there, US authorities insist WTO laws mandate their acceptance of the controversial E.Coli tainted product. 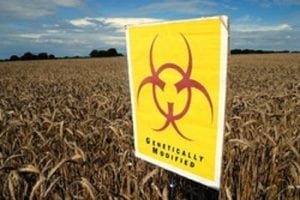 Surprise! GMO corn is made from the genes of the deadly e.coli bacteria. Image courtesy of PopularResistance.org.

The problem, the Chinese say, is that upon testing of the corn imports before being offloaded at the Chinese ports of Fujian and Guangdong, they discovered the presence of banned GMO properties. Last week, 120 million pounds of genetically modified American corn was rejected because it wasn’t corn – it was MIR 162 – a mutation created in laboratories that crossed poisonous bacteria genes with corn genes.

There’s a reason genetically modified food-like products require special labeling or are banned outright in most countries around the world. Unfortunately, ninety percent of America’s corn fields have now been taken over by the mutant half-vegetable-half-animal. It sounds bizarre to say, but how else do you describe a plant whose genes were replaced with those of predatory animal’s?

And in the case of GMO corn, they were also designed in the lab to wipe out all other corn varieties on Earth – an actual corn genocide. Think it’s a joke? Of all the countries of the world, Mexico is the only one left where natural corn still exists, unthreatened by extinction…for now.

MIR 162, the species of the predatory GMO rejected by China last week, is just that. The corn was designed to kill insects, worms and larvae, thus protecting the overall crop from being damaged by hungry bugs. How does it kill insects but not the fragile corn or the humans and animals that eat it? The scientists who designed its gene structure chose the genes of a specific bacteria that only kills certain bugs, allegedly, without any side effects to the humans and animals that eat it.

It’s worth repeating that according to critics, the number of natural corn genes replace with foreign genes to make GMO corn is about the same number of genes needed to change a human being into a monkey. Remember that the next time you’re eating corn, because in America it’s all genetically altered. Thanks to hundreds of millions of corporate dollars, it’s just against the law in the United States to put that on the label.

In the case of MIR 162, a strain the US says is perfectly safe to eat, there’s a seemingly horrific fact that may come as a surprise to every American who eats corn. The reason MIR 162 kills the bugs, worms and larvae that attempt to eat it is because some of the foreign genes used to design the laboratory-created corn substitute were taken from an animal bacteria fatal to humans – E-Coli. Yes, believe it or not, E-coli is the poison that Syngenta Seeds decided to splice into America’s corn to kill bugs.

The document goes on to explain, ‘The family of Vip3Aa proteins, in which Vip3Aa20 belongs, are produced by the bacterium B.thuringiensis that act as toxins to kill insect prey.’ The 41-page application from Syngena Seeds to the USDA also describes, in the company’s own words, how it is that the deadly bacteria only kills insects and not humans.

‘Vip3Aa proteins are similar to certain Cry proteins and are demonstrated to have toxic effects only on certain insects,’ the corporate filing explains, ‘The mechanism by which Vip proteins exert their insecticidal activity has been studied and found to be similar, but not identical, to that which has been described for the Bt Cry proteins that are contained in several commercial insecticide formulations.’ In other words, the GMO corn kills bugs in a biologically ‘similar, but not identical’ way as the toxic insecticides on the shelf of every lawn and garden center.

Getting to the specifics, the document says, ‘The Vip and Cry proteins bind to different receptors in the insect and the insecticidal activity of Vip3Aa proteins is limited to species within selected families of the order Lepidoptera.’ Translated into plain English, the deadly bacteria allegedly pass right through humans and most animals. It’s only a handful of species within one animal order that are killed. The document doesn’t say what the rest of the bacteria’s properties are doing while the ‘insecticidal activity’ is halted as it travels through our human systems.

Thanks, but no thanks

According to Chinese officials, that’s the reason the half billion pounds of American GMO corn have been turned away just in the last month. It was all infiltrated by the MIR 162 organism. And the Chinese, like the majority of the world, don’t trust the United States when it comes to guaranteeing the safety and long term side effects of GMO food substitutes, especially MIR 162.

And corn isn’t the only genetically modified product being rejected by the most populous nation on Earth. Also in the last month, China turned away 360 million pounds of American GMO grain for similar reasons. For their part, American agriculture corporations and independent farmers seem oblivious to the outrage against GMO products.

As detailed by RT News, one American corn trader blamed the Chinese rejections on politics. “It is really causing big trouble and it seems to be related to bilateral trade conflicts,” the corn broker told the news outlet. But Chinese officials fired back accusing the Obama administration of putting profits and politics over public safety.

The publication quoted China’s Minister of Commerce dismissing US complaints last month. He said it was, “irresponsible for the US to discard the consensus that has been agreed by most of the countries only because the deal cannot meet its own requirements for several products.” Taking a completely different stance all together, one analyst from the Chinese government said the rejections of US corn had little to do with GMO’s or politics.

The Chinese analyst was quoted by RT News saying that China had a record corn crop at home and simply didn’t need as many imports../../../articles/q42013/american-gmo-corn-made-from-e-coli-bacteria/. He remarked_ _ldquo.css;To some extent, there is a link to the domestic supply surplus. These are the rules of the game.”

US officials dismiss the Chinese rejection of 500 million pounds of US corn over the past month insisting they quickly found other buyers for it and the shipments were taken to other Asian nations. But some are suggesting that US corn sellers had to take a large price cut just to unload it. Still, USDA spokespeople dismissed the fears saying they just inspected 17.6 million bushels of US corn bound for China last week.

They didn’t say what would happen if that corn shipment was rejected as well. And there may be a reason Obama administration officials are avoiding the subject at home while using threats and strong arm tactics abroad to push the unwanted GMO corn on China. According to the same USDA inspector, corn bound for China represents 44 percent of all the corn inspected by the agency. If 44 percent, or even some of the US corn crop is suddenly rejected, what would that do to American corn farmers and the multi-national agri-giants that rule over them?

The report warns that roughly 4 billion pounds of American corn are en route to China right now. So far, the Chinese have only rejected a small percentage of the overall US corn imports. But if the trade war heats up or if the country is serious about banning GMO products, American farmers may be in for a major financial hit.

Melissa Sanchez - November 27, 2022 0
In Little Rock, Arkansas, finding rentals and homes for sale can be a tough challenge, especially when you’re looking in the Lake Maumelle area....