During the Civil War (from 1861 to 1865), President Lincoln needed money to finance the war from the North. The Bankers were going to charge him 24 percent to 36 percent interest. Lincoln was horrified and went away greatly distressed, for he was a man of principle and would not think of plunging his beloved country into a debt that the country would find impossible to pay back.

Eventually, President Lincoln was advised to get Congress to pass a law authorizing the printing of full legal tender Treasury notes to pay for the war effort. Lincoln recognized the great benefits of this issue. At one point, he wrote, “[we] gave the people of this Republic the greatest blessing they have ever had – their own paper money to pay their own debts”.

Lincoln printed $449 million dollars worth of Greenbacks (the exact amount being $449,338,902), money that he delegated to be created, a debt-free and interest-free money to finance the war. It served as legal tender for all debts, public and private. He printed it, paid it to the soldiers, to the US Civil Service employees, and bought supplies for war.

Shortly after that happened, The London Times printed the following:

“If that mischievous financial policy, which had its origin in the North American Republic, should become indurated down to a fixture, then that government will furnish its own money without cost. It will pay off debts and be without a debt. It will have all the money necessary to carry on its commerce. It will become prosperous beyond precedent in the history of the civilized governments of the world. The brains and the wealth of all countries will go to North America. That government must be destroyed, or it will destroy every monarchy on the globe”.

The Bankers obviously understood. The only thing, I repeat, the only thing that is a threat to their power is sovereign governments printing interest-free and debt-free paper money. They know it would break the power of the International Bankers.

After this was published in The London Times, the British government, which was controlled by the London and other European Bankers, moved to support the Confederate South, hoping to defeat Lincoln and the Union, and destroy this government which they said had to be destroyed.

They were stopped by two things.

First, Lincoln knew the British people, and he knew that Britain would not support slavery, so he issued the Emancipation Proclamation, which declared that slavery in the South was abolished. At this point, the London Bankers could not openly support the Confederacy because the British people simply would not stand for their country supporting slavery.

The North won the war and the Union was preserved. America remained as one nation.

Of course, the Bankers were not going to give in that easy, for they were determined to put an end to Lincoln’s interest-free, debt-free Greenbacks. He was assassinated by an agent of the Bankers shortly after the war ended.

Thereafter, Congress revoked the Greenback Law and enacted in its place, the National Banking Act. The national banks were to be privately owned and the national bank notes they issued were to be interest-bearing. The Act also provided that the Greenbacks should be retired from circulation as soon as they came back to the Treasury in payment of taxes.

In 1972, the Unites States Treasury Department was asked to compute the amount of interest that would have been paid if that $400 million dollars would have been borrowed at interest instead of being issued by Abraham Lincoln. They did some computations, and a few weeks later, the United States Treasury Department said the United States government saved $4 billion dollars in interest because Lincoln had created his own money. So you can imagine how much the government has paid and how much we owe solely on the basis of interest.

There were changes in the money and banking laws for the next fifty years. Finally, in 1913, the Bankers were able to get their Federal Reserve Act passed through Congress which replaced the National Banking Act that had earlier replaced the Greenback Law. If the government would have continued the policy of Abraham Lincoln, the warnings given in The London Times would have come to pass. America would be a debt-free nation, the most prosperous in the world. And the brains and the wealth of the world would have come to America.

But with this Federal Reserve Act being passed, Congress gave up its power to create its own money that it was given in the United States Constitution, and gave this power over to private Bankers who called themselves the Federal Reserve. The Bankers had achieved their ultimate goal, for now the United States operated under a central bank that was privately owned. They now had the power to run the country by controlling the creation of the money, and were free to charge the interest they so desired.

As Mayer Anselm Rothschild once said, “Permit me to issue and control the money of a nation, and I care not who makes its laws…”

No United States President since Abraham Lincoln dared to go against the system and create his own money, as many of these Presidents were actually only instruments or puppets of the Bankers. That is until President John F Kennedy came into office.

President Kennedy was not afraid to ‘buck the system’, for he understood how the Federal Reserve System was being used to destroy the United States.

As a just and honorable man, he could not tolerate such a system, for it smelled of corruption from A to Z. Certainly he must have known about the Greenbacks which Abraham Lincoln created when he was in office.

On June 4, 1963, President Kennedy signed a Presidential Executive Order 11110, which further amended Executive Order 10289 of September 19, 1951. This gave Kennedy, as President of the United States, legal clearance to create his own money to run the country, money that would belong to the people, an interest and debt-free money. He had printed United States Notes, completely ignoring the Federal Reserve Notes from the private banks of the Federal Reserve.

Records show that Kennedy issued $4,292,893,825 worth of cash money. It was perfectly obvious that Kennedy was out to undermine the Federal Reserve System of the United States.

But it was only a few months later, in November 1963, that the world received the shocking news of President Kennedy’s assassination. No reason was given, of course, for anyone wanting to commit such an atrocious crime. But for those who knew anything about money and banking, it did not take long to put the pieces of the puzzle together. For surely, President Kennedy must have had it in mind to repeal the Federal Reserve Act of 1913, and return back to the United States Congress the power to create its own money.

It is interesting to note that, only one day after Kennedy’s assassination, all the United States Notes which Kennedy had issued were called out of circulation. Was this through an Executive Order of the newly-installed President, Lyndon B Johnson? Was President Johnson afraid of the Bankers? Or was he one of their instruments? At any rate, all of the money President Kennedy had created was destroyed. And not a word was said to the American people.

A Lesson to Learn

There is much that can be learned from our past history. Here we are, more than a century and a half from the days of Lincoln, and the United States is still operating under the Federal Reserve System. It has already plunged our country trillions of dollars into debt, a debt it will never be able to pay, and has been responsible for every kind of corruption imaginable. Yet, barely a peep of protest can be heard from the American people.

All the Bankers have to do to keep their power is to get rid of the few politicians who are honestly working for a reform in our economic system, and the people at large remain ignorant and controlled. It is obvious the American people need to be awakened to the truth.

There can be no peace without justice and there can be no justice without a reform in our economic system, for the financiers are behind all the corruption in our government. Abraham Lincoln and John F Kennedy both had the courage to stand up for principles and to fight for justice. They have both gone down in history as being true patriots of the United States. But do we, as citizens, have the courage to follow their example? 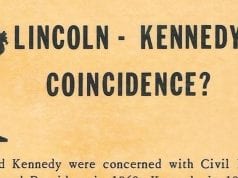