Home Uncategorized US conflicts spread to the Moon, include Nukes 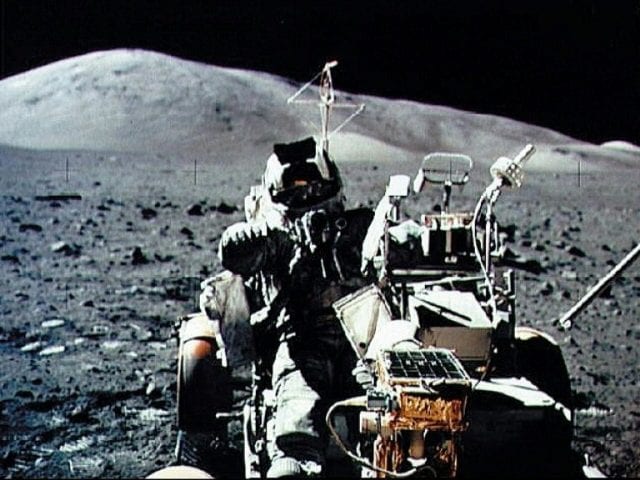 December 5, 2013. When China launched its unmanned Moon rover named Jade Rabbit on Monday, it showed the nation’s ability to match the US, Russia and Japan in terms of space exploration. It also illustrated something being reported in Asia but not America – an escalation in the possible US-China conflict over the Communist country’s rapid expansion, not just here on Earth, but also on the Moon. 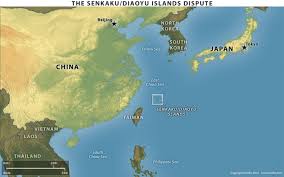 The tiny white square shows the area in dispute. Image courtesy of Vice.com.

Make no mistake, China and the United States have been fighting a restrained space war since the 1990’s. It was during the Clinton administration that the Chinese military arranged for top secret US missile technology to be transferred from the Pentagon to the Commerce Dept., where it was promptly sold to the Chinese over fist-pounding objections by the Defense Department. Flash forward 13 years to 2007 when China became only the second country in the world to successfully use military weapons in space.

What everyone but the American people seem aware of, is the fear that China and Russia may have unlocked the key to defeating the United States in a full blown military confrontation, including a nuclear war. The secret? Shoot down America’s satellites and watch every US and NATO ICBM, aircraft carrier, cruise missile, tank, unmanned drone, and stealth aircraft sit motionless, blind, lost and unable to aim any of its weapons.

Immediately after the launch of the Chinese Moon lander on Monday, US media outlets described the mission as a scientific quest of exploration, 50 years behind America’s own mission to the Moon. But in China, the news was quite different. According to Chinese state-sponsored media outlets, this week’s Moon mission is the Communist military’s latest step in establishing a military Moon base capable of launching lunar-based missiles at targets both in space and on Earth.

As reported by Infowars yesterday, publications like the Taiwan-based China Times are describing the country’s Moon mission as the early phase of establishing a Lunar ‘death star.’ Verifying the legitimacy of the reports from Taiwan, Infowars confirmed the military Moon base via the Beijing Times, which is reportedly tied to the Chinese People’s Liberation Army and their official publication The People’s Daily.

The account from Taiwan quotes sources close to the Chinese PLA that say the military is serious, but still far from creating any kind of military base in space. Still, it says, Chinese Generals are none the less looking into ways that the Moon, “Can be transformed into a deadly weapon. Like the Death Star in Star Wars, the moon could hypothetically be used as a military battle station and ballistic missiles could be launched against any military target on Earth.”

US China cold war heats up

The recent military confrontation in the South China Sea last week between China, the US and Japan has lead some observers to suggest the world is at the dawn of a new East-West cold war. When the Chinese military published a map of US cities last month and indicated their destruction by the PLA’s submarine-launched ICBM’s, the American media dismissed it as harmless saber-rattling. But the US press couldn’t have been proven more wrong last week when US, Japanese and Chinese military forces collided over the hotly disputed territory.

China shocked the world nearly two weeks ago when it announced it was officially expanding its military control and territorial boundaries to include many disputed islands in the South China Sea. For years, disputes over national rights to the vast sea and its airspace have occurred between China, Japan, the Philippines and South Korea. Until now, it has been treated by all countries involved as something akin to ‘international waters,’ freely used by all while its ownership is in dispute.

That all changed last year when Japan landed actual military personnel on the disputed islands. Infuriated, China has repeatedly sent war ships, fighters and spy aircraft to the scene and has been applying naval and air pressure ever since. For the past year, Japan has also increased its military presence in the region while its US ally has been playing a tug-of-war game trying to increase its forces in two places at once, preparing for potential conflicts in the Persian Gulf and the South China Sea at the same time.

US and China almost go to war

Less than a week ago, the US and China almost went to war. In a virtual game of chicken between each country’s Air Forces, Chinese, American and Japanese aircraft attempted to intimidate each other into retreating from the disputed air space over the contested islands. The most dangerously disputed island chain in the South China Sea, the islands are called Senkaku in Japan and Diaoyu in China.

For the past year, Japan has stepped up its military presence in the area and asserted its claim of ownership over the territory. That position was illustrated six days ago when a typical US-Japan air patrol in the area was suddenly met by a number of scrambled Chinese fighter jets. Acting as if the Chinese mainland had just been invaded, the PLA Air Force initiated ‘Emergency Defense Measures’ and confronted the American and Japanese patrol in an attempt to enforce it’s newly announced territorial claim.

According to an account by AFP and published by Yahoo News, the Western patrol included two US spy aircraft accompanied by a ten-plane air wing from the Japanese Air Force that included at least two American-made F-15’s. They were met by an unknown number of Chinese military aircraft, including at least two jet fighters of their own.

Only days earlier, in response to China’s declaration of ownership of the vast sea territory, American B-52 bombers were sent on a fly-over of the disputed island chain. The exercise was meant as a very serious warning that the United States intended to stand by its Japanese and South Korean allies if a conflict were to break out. Matching the Americans saber for saber, the PLA’s latest act of confronting US military planes with its own Air Force fighters is meant to show that the Chinese are just as serious.

There’s no question that at the rate we’re going, the new East-West cold war will be over before it starts. Unless one side blinks, which isn’t likely, or an international agreement is brokered, the world is going full speed toward another world war to decide ownership of the South China Sea. And if recent statements by Russian Prime Minister Dmitri Medvedev can be believed, it won’t be some far-off TV show like Americans are used to. Instead, it may be a nuclear war.

Medvedev was speaking to the St. Petersburg International Legal Forum last week when he touched upon a very serious and dangerous subject, “nuclear war.” While he didn’t mention any adversarial nations by name, it was obvious by the end of his statement that his words were a direct warning to US President Barack Obama and the American people.

The speech was recorded by Russia Today, distributed by Larouche PAC, and posted to YouTube by WikiIntelNews. A direct transcript of Russian Prime Minister Medvedev’s statement quotes him warning:

“This is a reality we should recon with. The state authorities will have to respond to this demand in a hopefully efficient way. The state sovereignty doctrine should not be diluted even when it might be convenient for achieving any current political goals, up to being elected for a particular office. This is quite dangerous for the global order. In the last years, there have been quite a number of attempts to violate the sovereignty doctrine.

Take, for example, military operations against certain countries, bypassing the UN; or statements on particular political systems having lost their legitimacy; statements made by foreign countries rather than by residents of corresponding countries; or by imposing collective sanctions, bypassing international institutions. All these actions are not improving the situation in the world. Reckless military operations in foreign states usually end up with radicals coming to power. At some point such actions, which undermine state sovereignty, may well end in a full-blown regional war, and even – I’m not trying to spook anyone – the use of nuclear weapons.”

While the statements from the Russian Prime Minister are most-likely referring to a possible American-launched war on Iran and Syria, the warning could also be applied to the current US intervention in the South China Sea. And unless America wants to fight a real war against a real foe – one that destroys entire American cities and their populations – the US may want to be careful which country it invades and attacks next.

The unlucky 7 Animals going Extinct before our Eyes