November 17, 2013. The Streets. (ONN) With the holidays just around the corner, people are edging closer to that time of year when they care about those less fortunate. But most of us are misinformed when it comes to those worst off – the homeless. An essay from this week’s Cracked exposes the real face of homelessness while the hacker group Anonymous has launched a special operation to help them survive this winter. 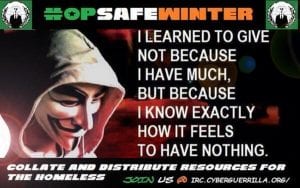 We couldn’t have said it better ourselves. Image courtesy of Anonymous OpSafeWinter Twitter feed.

This year’s holiday theme appears to be helping the homeless. With the nation’s wealthy currently setting records day after day for being richer than ever before and the stock market seeing historic record highs each day, people are quick to forget that the rest of America never recovered from the economic crash of 2008 and 2009. Regular people are poorer than ever and homelessness is at a record level.

7 Things no one tells you about being homeless

A report from Cracked this week by J.F. Sargent and William Bonnie has taken the nation by storm and has seen over 1.3 million page views in just the five days since it’s been published. It truly is a must-read. The essay is a first-hand account of a young man’s real world experience with being homeless. And as your author can personally attest from experience, they hit the nail on the head.

Introducing their itemized list, the article begins, ‘Well, in the summer and fall of 2009 in a little town in Montana, I was “lucky” enough to peer through a window at the world of chronic homelessness while experiencing some temporary homelessness of my own. Here’s what I hope you never find out.’

Like a David Letterman top 10 list, the essay begins with lesson #7, ‘It doesn’t take much to wind up homeless.’ The author explains how he was sharing an apartment and wasn’t aware his roommate’s rent checks were bouncing. They came home one day to find their door padlocked and all their belongings outside. The question is, where would you go? This individual had recently moved to a new state and his only friends were his also-evicted roommates. The moral of the story is, that’s how fast and easy it is to become homeless.

With stinging accuracy, the authors sum up a terrifying realization that many of us have experienced first hand. He writes, ‘For the first time in my life, the sun went down and I had no idea where I was going to sleep.’ Another surprise is lesson #6, ‘Having a job won’t save you.’ They point out that 30% of all homeless people actually have a job. In the author’s case, he began living in his car. But he used all his income to survive and remain presentable to keep his job. That leads to another of the essay’s lessons that we at Whiteout Press have always preached, it’s more expensive to be poor than it is to be rich.

The author explains, ‘Here’s the second big surprise waiting for you out on the street: how incredibly expensive homelessness is. See, living on the street wouldn’t be that big of a deal if you were, say, a robot. But as a functioning organism living in a society, you suddenly realize there are all of these basic needs you need to MacGyver solutions to on the fly.’ Topping the list are food, showers and laundry.

The author talks about how he eventually went on public aid and received food stamps. But that brought on another dilemma your author has experienced first hand. The vast majority of state food stamp programs ban the purchase of already prepared foods, from restaurants to the fried chicken in the grocery store’s deli section. Being homeless makes it difficult, if not impossible, to prepare and cook food. You have no electricity, stove or refrigerator. So, like most poor people, the author depended entirely too much on high priced, long-lasting, unhealthy junk food.

The article goes on to touch upon a number of other rarely discussed surprises America’s homeless must deal with. One involves the shortage of homeless shelters. He explains that the homeless with jobs can’t use shelters because there is so much demand, people have to begin lining up during the day to get a spot for that night. He also warns that while the staff are doing the best they can, shelters are incredibly dangerous places and it’s often safer to sleep under a bridge.

With Americans no longer able to turn a blind eye to the homeless epidemic all around them, even the cyber hacker group Anonymous is getting involved. This week, members of the group announced they’re asking all their supporters to take a break from attacking corporate and government computers and defending grassroots activists, and instead turn their attention on doing something to help out a homeless person or two.

Showing the common sense that most multi-million dollar charities lack, Anonymous is simply asking that people round up a few of their extra blankets, some warm clothes and maybe even a little food, and drop them off personally with the first few homeless people they come across. With America in the shape it’s in these days, they shouldn’t be hard to find.

Like most anonymously produced and distributed Anonymous videos, the one posted to YouTube this week utilizes the familiar female computer-generated voice. “Fellow Anon and citizens of the world,” the female cyber voice-over begins, “We are proud to announce #OPSafeWinter.”

The Anonymous video goes on to explain the nature of their social offensive. “In this age of consumerism, there is very little love or care about each other. We’re here to change that,” the digital voice explains, “No longer shall we stand by and watch isolation and fear be spread by the establishment, which is destroying communities and lives. We all have a voice. So make yours heard. You are the power. Your choice. Your life. You are the motivation for justice.”

Mission of the operation

The Anonymous YouTube video goes on to explain “the mission of the op” as being, “to highlight the homeless situation in areas throughout world, build up a resource network for food supply – blankets, clothes, socks, etc., that can be donated.” The announcement then shows why the group has been so successful in the past. Taking field command and issuing specific orders, the video tells Anonymous members and their supporters exactly what they should do.

After first beginning their effort to round up supplies for the homeless, local Anonymous leadership and activists are told to make an accurate count of their town or city’s homeless, or request the information from local officials. Then, provide the means and logistics to collect the supplies and deliver them to the homeless. The two-pronged campaign appears to be as effective as it is simple.

Anonymous closes their video announcement by saying, “Let’s make winter as safe and comfortable for as many people within our reach and beyond…Everyone can help, no matter how small or big the activity. Join us. We are Anonymous. We are Legion. We do not forgive. We do not forget. Expect us. We are the voice of the voiceless.”