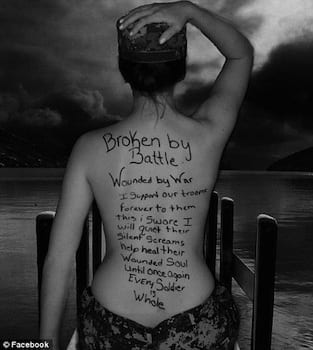 July 4, 2012. America. A touching and heartfelt poem by a Canadian writer based on the unspoken epidemic of depression, mental illness and post traumatic stress disorder rampant among military soldiers and veterans. These brave but broken men and women often feel compelled to remain silent. Accompanying this stirring poem is an interview with the author, Chris Kyte. From Battling BARE.

When there were none left to stand along the wall
When none were left who refused to fall
When mortal wounds of blood had dried
When the strength of man had all but died.

Merely drawn of flesh and bone

There you stood, strong as stone
When hope could not be found in sight
When shadows over ran the light
When the world seemed dark and full of fear
When we felt abandoned and none were near
And we were left to crawl alone
You were there, strong as stone

When life was large and harsh assuming
When rage was hot and all consuming
When other truths would trip or stumble
When other values fail and crumble
And faith was a patchwork poorly sewn
Still you stood, strong as stone

Rest assured it will be known
You are a soldier, strong as stone

Out of the blue one evening, an incredible poem was sent in to us. I knew nothing of the woman whose talented hand had skillfully crafted this moving piece that brought tears to my eyes each and every time it was read. Knowing that these words needed to be shared with the world, I requested the opportunity to interview Chris and find out all about her and the story behind “Soldier”. She graciously accepted and now we are sharing this incredible story with you.

After talking about all of the amazing Soldiers that Chris has had the privilege to meet with her job in Canada, I finally asked:

Ashley Wise: So, what is the story behind this poem—that by the way has moved each and every reader I’ve shared “Soldier” with?

Chris Kyte: The story behind these words took place during a time when mental illness within the military was still hush-hush everywhere, including here in Canada. The poem was written initially for my friend, Irey, but I also gifted it to a family who lost their Dad, he was a Soldier as well. The story with the second Soldier was that he was handing out pencils and candies in Afghanistan where he was serving when he was blown up by an IED. Obviously, the death of their dad was a difficult thing to deal with, but to have him killed like that while doing something nice for the children of another country made the death that much more difficult to deal with. I knew these words would help somewhere along the way.

Ashley Wise: Wow. I can’t even imagine how complicated their grief and healing process would have been. Would you tell me about your friend, Irey?

Chris Kyte: (Here I could hear the smile on Chris’s face in her voice) Irey and I met online in a chat room—as silly as that sounds. He was originally from Ireland, but he left Ireland for he States and became a Marine. He never told me why he left his homeland, but I always felt he was running from something. Irey and I talked for years though we never had the chance to meet face to face. He was with a Special Operations Unit in the Marine Corps—I think that is part of what drew me to keep in touch with him. I meet Soldiers all the time, but there is just something about Marines—their beliefs and the intensity they believe them. He always used to make me laugh—smashing beer cans on his head, being silly, telling jokes. He was a lot of fun and had a huge heart. I made him promise me that when we finally had the chance to meet, we’d go dancing. Irey was not a dancer, but he loved to make people happy—so, he agreed.

Ashley Wise: My hubs and I met online, too. And I get what you are saying about Marines—just something about them. So what happened?

Chris Kyte: Well, Irey would disappear for weeks and months at a time and then just one day show back up. I caught him one night and we started chatting. He was sent back early from a mission that had been compromised. He and his teams’ names were leaked somehow—he never went into a lot of detail with what he did and I never pressed for details. Anyway, he ended up getting honorably discharged and trying to cope in the civilian world. He started drinking a lot. The military was really all he ever knew and he hated being out. He began to open up here and there about certain things that had happened in his life—he gave a few details of some of the things he saw and lived through while on certain missions—things that haunted him every day.

Ashley Wise: Would you share one of the stories Irey told you?

Chris Kyte: (Chris started getting choked up here.) He told me there was an event he had attended in his Marine Corps dress uniform and, I think it was when he was leaving, some civilian man walked up and spit on him. I mean he really spit on him. Irey told me the guy didn’t just stop there, but went on to tell him was a disgrace he was to America, that he was a murderer and should be ashamed of what he’d done.

Ashley Wise: That is infuriating. What happened to Irey after that?

Chris Kyte: Well, Irey disappeared for awhile—which wasn’t uncommon. A few months had passed and I hadn’t heard from him. So, I asked our group. I haven’t shared this story in while. (Chris’s heartfelt tears were obvious in her talking now.) Someone in the group posted an article—Irey had ended his own life. He must have been hurting badly and been so haunted every day. I live my life with very little regrets. I’ve lived through abuse, sexual assault—but choose to look back on those events as learning experiences—but I regret that I’ll never get to meet Irey…that we’ll never get that dance I made him promise me.

Ashley Wise: What do you think pushed Irey to make the decision to end his own life?

Chris Kyte: A violent life was all he ever knew. He almost died many times at the hands of someone else. Some of his friends died next to him. Irey was really haunted by the memories of everything that he had witnessed while serving as a Marine. He really loved being a Marine—and after he got out, he hated life. He wanted to be a Soldier.

Ashley Wise: Obviously, Irey’s death inspired your poem, “Soldier”. What did you want the world to know?

Chris Kyte: Most importantly I wanted Irey to know that someone cared—someone knew what he did. Someone tried to understand his anguish. Someone respected him, cared for him and admired him for his strength, courage and bravery. There are too many Ireys out there—struggling to cope with life after they did jobs that most of us would never do—could never do and that is just not ok for these Soldiers to be suffering like this.

Ashley Wise: How can civilians help?

Chris Kyte: Awareness—people need to know what Soldiers are going through. Only then can we help to make Soldiers whole again.

Ashley Wise: Many civilians really aren’t comfortable hearing about the reality that Soldiers live. How would you respond to that?

Chris Kyte: Where would we be if our Soldiers turned a blind eye and stayed in their comfort zones? Where would our freedoms be? I guarantee most countries would be run by a Hitler, a Bin Laden, a Saddam. Sure it isn’t comfortable—but after everything that has been sacrificed by so many for freedoms, asking someone to be a little uncomfortable is definitely not too much to ask. The only reason you can stay in your comfort zone is because Soldiers have died to make that possible—think about that before you turn a blind eye.

Ashley Wise: What would you say to the “Ireys” out there?

Chris Kyte: Thank you. I respect you. I can’t possibly know what it is like. I will never understand but please know that I am forever grateful. Don’t let the evil win—there are people who care…people who want to help. It is easy for me to say hang on another day, but please, we need you. This world would be so much less without you in it.

How do you offer advice to someone who lives in hell every day—a hell that is hidden inside them and no one else can see? They just want that hell to stop. That silence is tempting—all I can say is please don’t.