August 12, 2011. Ames. With eight of the major candidates for the Republican nomination for President on stage in Ames, Iowa, it was the confrontational questions that may have stolen the show. At its lowest point, moderators asked Congresswoman Michele Bachmann (R-MN) how “submissive” she would be with her husband. While at its most entertaining moments, former Speaker Newt Gingrich stuck it to the same moderators for their “dumb questions” and “Mickey Mouse games”. 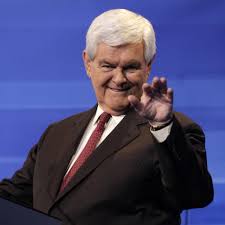 Good debate for Gingrich in IA

Like the crazy old uncle who isn’t afraid to call it like he sees it, mostly because he’s seen a lot, Gingrich blasted Washington and the ‘Super Committee’ as “the dumbest idea Washington has come up with.” When the topic came to foreign policy, the former House Speaker again accused the moderator of posing a gotcha question. “No it’s not” the debate host shot back. Gingrich even momentarily won over some of the Ron Paul supporters toward the end of the debate when Newt agreed with the Texas Congressman, “I think it’s a scandal that the Federal Reserve is secret”. That won Mr. Gingrich another rousing round of cheers.

Texas Congressman Ron Paul appeared to come in second. He definitely had the home field advantage with the crowd. In his opening statement, Paul challenged leaders from both parties saying of the debt ceiling fiasco, “If you don’t understand the problem, you can’t fix it.” At one point, moderators made Michele Bachmann challenge Ron Paul over his stance on Iran. While Bachmann said a nuclear armed Iran wouldn’t be tolerated, Paul argued for opening up dialog rather than jumping straight to war. “We don’t even talk to Cuba” he said, reinforcing his point. The following questions was to Rick Santorum instructing him to also challenge Paul over Iran. “Tell him [Mr. Paul] if you think he’s smoking mushrooms” paraphrasing the moderator’s question to former Senator Santorum.

Like a champion of Federalism and big government, Rick Santorum’s frustration and anger toward Congressman Paul was obvious. Debate moderators noticed it too and invited the Santorum to tell Rep. Paul why he is wrong on his belief in a strong tenth Amendment and State’s Rights. That lead to a deep seeded difference of opinion that echoes the overall divisions with the GOP as a whole. While Congressman Paul asked, “Why do we need a government license to get married? Why can’t we just go down to the church?” Santorum quickly replied, “That’s how we got gay marriage.” Paul closed with his usual remarks touting “liberty, peace and prosperity”.

Businessman Herman Cain finished a surprising third to the polled independents who watched the debate. While the other candidates, except Gingrich, were allowed to announce and elaborate on their grand ideas, Mr. Cain was repeatedly forced to respond to statements he allegedly made in past weeks and months. To Cain’s credit, he was nothing short of classy and intelligent in his responses. And for the only non-politician in on the stage, he did a masterful job of turning each question around and into his own talking points.

Cain’s reoccurring suggestion was to, “Make the tax cuts permanent.” Moderators quickly changed to the topic of Islam and statements Cain was alleged to have made. Mr. Cain replied that the statements were misquotes, but, “Shiria law does not belong in the courts of the United States of America.” That received a round of applause. In the following round, Cain was challenged on his statement of solving the illegal immigration problem with, “a twenty foot barbed wire electrified fence.” In answering, Cain replied, “America needs to learn how to take a joke”, again to large applause.

Mitt Romney finished fourth with a positive and respectable showing. He came right out with his “seven steps to economic turnaround’, listing all of them in thirty seconds. When challenged by the fact that when he was Governor, Massachusettes had poor job growth, Romney conceded that he’d learned “how we lose jobs and how we gain jobs”. He then went on to point out that only he and Herman Cain have real world business experience. He also argued that while his state’s performance wasn’t stellar, it was better than national averages.

When cornered by moderators insisting there was a scenario where he would favor raising taxes, Romney stuck by his guns and would only repeat, “I don’t believe in raising taxes.” After Tim Pawlenty was forced to challenge Romney on the Minnesota Governor’s term ‘Romneycare’, referring to Mitt Romney’s health care plan in Massachusettes, Romney explained that the difference was the Constitution. The Constitution allows states to do such things, but not the Federal government. In closing, Romney took a shot at President Obama saying, “To create jobs, you have to have had a job.”

Minnesota Congresswoman Michele Bachmann had a busy night, if for no other reason than because she was given by far the most speaking time. She summed up her opening statement saying, “Not increasing the debt ceiling was the right answer.” The first question of the debate set the tone. It was to Tim Pawlenty, but it asked him about his statements that Rep. Bachmann’s record of accomplishments was “nonexistent”. In response, Congresswoman Bachmann was given three rounds of replies before the moderator moved on.

Another round featured a rematch. While Pawlenty was hit for calling his tax on cigarettes a “health impact fee”, Bachmann announced she voted against a tax hike on cigarettes. Debate hosts were already waiting and asked her why she voted for it after campaigning against it. Bachmann a very Republican response saying she was forced to vote for the tax hike because the final bill was paired with protections on the unborn. That response turned into the most angry exchange of the evening with six full turns of comments between the two being allowed by the moderator.

Bachmann was given four of the six turns to speak, but Pawlenty may have gotten the knockout punch in when he exclaimed, “Her answers are illogical!” Bachmann earned Rick Santorum’s ire when she announced she was against any laws that require American citizens to purchase anything, including healthcare or insurance. Sounding like the only adult in the room sometimes, with grandpa Newt, Santorum’s Federalist beliefs kept coming through. Arguing with Bachmann, he told her, “There are things the States can’t do”. The final outrage toward the Congresswoman was when the debate moderator quoted Michele Bachmann reciting a bible passage about wives being submissive to their husbands. The moderator finally got to his question asking, “As President, would you be submissive to your husband?”

It was a heated and passionate two hours at the Iowa Straw Poll Debate last night. And it was obvious right from the start that it was no accident. The entire debate format was geared toward instigating arguments and disagreements between the eight GOP contenders. Half the questions posed asked the candidate to comment generally, to the viewers. The other half specifically insisted the candidate go one on one with a second candidate of their choosing. Like gladiators of old, the GOP field of candidates jousted, often taking personal jabs at one another.

Questions were phrased along the lines of, ‘Congressman Paul voted against raising the debt ceiling. Former Senator Santorum, tell Congressman Paul why he’s wrong.’ And there’s a reason we use Texas Congressman Ron Paul as the example. According to the count made here at Whiteout Press, Ron Paul was the target of more prearranged one on one attack questions than any other candidate. Based on our unscientific count and including a couple secondary challenges, Paul was the target 5 times, Bachmann 3 times, Pawlenty and Romney 2 times each, and even Sarah Palin and Rick Perry were held up as political piñatas at one point.

Based on feedback from a handful of independent voters, here is the initial reaction. On a scale of 0 to 4, where 4 is the best and 0 the worst, we show the debate winners being:

Newt Gingrich (4.0)
Ron Paul (3.5)
Herman Cain (3.0)
Mitt Romney (3.0)
Michele Bachmann (2.5)
Rick Santorum (2.5)
Tim Pawlenty (2.0)
Jon Huntsman (2.0)
Newt Gingrich stole the show. Immediately after the debate’s conclusion on Fox News, TV commentators commended the former Speaker on his performance. Gingrich’s first statement reflected the typical Newt Gingrich campaign speech, “Thirty years ago…”. After giving a recap of the good ole days of the Reagan administration, the second round saw a new and improved Newt. After a question challenging his competence with money and management – his campaign being $1 million in debt and his staff walking out – Gingrich shook his head slightly and said, “I put aside talking points. I wish you would put aside the gotcha questions.” The crowd of non-Gingrich supporters erupted with cheers.

Former Senator Rick Santorum had a more passionate and colorful debate this time if not a victorious one. As mentioned, there were times when the former Senator came across as the only grown up on the stage. He didn’t win many supporters in the GOP crowd however by reinforcing his positions for stronger, more powerful government, his Federalist support over States Rights, his support for raising the debt ceiling and his support of all the foreign wars. At one point while arguing with Congressman Paul, Santorum yelled out, “No, you give these guys extra time” referring to the moderator’s special treatment of Bachman and Pawlenty. Rick Santorum’s closing statement was his most successful of the night, “I beat three incumbent Democrats!”

If there were any losers tonight, it was Tim Pawlenty and Jon Huntsman. While Pawlenty was forced into a number of mud-slinging matches with Bachmann and Romney, Huntsman was actually challenged by debate moderators with, “Maybe you’re running for President in the wrong party.” In the end, the two just lacked excitement and any crowd support. In Pawlenty’s defense, just as the New Hampshire debate appeared to hold him down while Mitt Romney took shots at him, Iowa debate sponsors held him down so Michele Bachmann could do some damage. He also didn’t do himself any favors by admitting to mistakes like when he said, “I did agree to the cigarette fee and I regretted it.”

If there was a surprise winner, it may have been Newt Gingrich. His knowledge and experience is undeniable. His ideas are somewhat shocking at first, but they’re sound. And married to his cowboy attitude toward the GOP establishment, he may have found a winning combination. For a recap of the recent GOP Presidential debate in New Hampshire, read the Whiteout Press article, ‘New Hampshire Republican Debate Recap’.

Subscribe to Whiteout Press – only 12 emails per month in your Inbox. It’s FREE and you can unsubscribe at any time. Simply enter your email address above and hit ‘Submit’.