With tens of thousands of US troops massing on two of Iran’s borders, three US aircraft carrier fleets speeding toward the Persian Gulf and the largest ever joint missile exercise between Israel and the US, world spectators are holding their breath this week fearful that world war 3 is about to start. As always when global occurrences threaten the existence of humankind, the world’s residents look to the most proven future seer in human history – Nostradamus.

After the attacks of 9/11 and in the build-up to the first Iraq war, Americans rushed to buy Nostradamus books to see what the visionary prophesied. The internet became flooded with fictitious and counterfeit Nostradamus quotes, many of which found themselves being rebroadcast in corporate newscasts. With the current preparations being made for the upcoming US-Israel-Iran war, we at Whiteout Press thought we would take a look at Nostradamus’ writings for ourselves.

In case you missed it, two weeks ago Whiteout Press published its most widely distributed article ever by the independent news outlet, ‘US Troops going to Israel’. Yesterday, we continued to bring our readers the next round of breaking stories concerning the current Middle East crisis with the article, ‘Is this the Eve of Middle East War?’.

Now, we bring you our readers, the mysterious and yet prophetic words of the famed sixteenth century seer Nostradamus. Since at the time of Nostradamus, there was no United States, Israel, Iran, Saudi Arabia or Turkey, one must be able to substitute the mid-millennia nations for today’s. When Nostradamus refers to Persia, he’s talking about Iran. When he mentions The New City, he’s referring to the USA. To refer to modern-day Israel, the French psychic would use terms such as Jerusalem or Judea. For Saudi Arabia, the prophet called it Greater Arabia or Arabia. And for Turkey, Nostradamus called it Constantinople or Byzantium.

As most know, Nostradamus used multiple languages, including astronomy and astrology to mask his premonitions from the Church who would have tortured and executed him for it. Therefore, many of Nostradamus’ quatrains could very well refer to the upcoming Middle East war, but we’ll never know until after the fact. For this article, we at Whiteout Press searched all of Nostradamus’ prophecies for the key words ‘Persia’ and ‘Arabia’.

Rain, famine and war will not cease in Persia;too great a faith will betray the monarch.Those (actions) started in France will end there,a secret sign for one to be sparing.

France shall be accused of neglect by her five partners.Tunis, Algiers stirred up by the Persians.Leon, Seville and Barcelona having failed,they will not have the fleet because of the Venetians.

Burning torch will be seen in the sky at nightNear the end and beginning of the Rhone:Famine, steel: the relief provided late,Persia turns to invade Macedonia.

The chief of Persia will occupy great “Olchades,”The trireme fleet against the Mahometan peopleFrom Parthia, and Media: and the Cyclades pillaged:Long rest at the great Ionian port.

The third climate included under AriesThe year 1727 in October,The King of Persia captured by those of Egypt:Conflict, death, loss: to the cross great shame.

The chief of Scotland, with six of GermanyCaptive of the Eastern seamen:They will pass Gibraltar and Spain,Present in Persia for the fearful new King.

Through fire and arms not far from the Black Sea,He will come from Persia to occupy Trebizond:Pharos, Mytilene to tremble, the Sun joyful,The Adriatic Sea covered with Arab blood.

Divided by the two heads and three arms,The great city will be vexed by waters:Some great ones among them led astray in exile,Byzantium hard pressed by the head of Persia.

Through the spite of the King supporting the lesser one,He will be murdered presenting the jewels to him:The father wishing to impress nobility on the sonDoes as the Magi did of yore in Persia.

Some of these prophecies, like the one that references the date October 1727, are obviously not referring to the current confrontation. Others however, are hauntingly similar to today’s current events.

War in today’s Middle East has already been plotted out by the various nations involved. Here’s how the modern day scenario is expected to play out – Israel launches a strike, possibly nuclear, on Iran to disable its nuclear capabilities. Iran responds by launching attacks on Israel and US ally Turkey, as Iran has already stated it will do if attacked. US carriers and war ships will launch attacks on Iran from the Persian Gulf. Russian made anti-ship missiles will be utilized by Iran to take out the US Navy. NATO troops will deploy to Turkey to protect their ally. The one million-man Iranian-backed army will march across Iran’s ally Iraq, and into Israel and Turkey. Israel at the time of Nostradamus, was controlled by Egypt and Turkey was called Byzantium.

This Quatrain literally spells out Iran’s already-stated military response if attacked by Israel or the US. Consider another striking observation. A common theme in many of the above Nostradamus predictions is the loss of America’s Naval fleet. Statements include: ‘The rule of the Church will succumb by sea’, ‘The great city will be vexed by waters’, ‘The chief of Scotland, with six of Germany Captive of the Eastern seamen’, ‘The trireme fleet against the Mahometan people’, ‘Long rest at the great Ionian port’, ‘they will not have the fleet because of the Venetians’. These lines aren’t from the whole of Nostradamus’ collection either. They are only from the Quatrains that mention Persia/Iran.

The most haunting Quatrain however, comes from a search of Nostradamus’ predictions centered around the word ‘Arabian’, as in Saudi Arabia:

By night the Rainbow will appear for Nantes,By marine arts they will stir up rain:In the Gulf of Arabia a great fleet will plunge to the bottom,In Saxony a monster will be born of a bear and a sow.

First, Nantes is a region of France. And many of Nostradamus’ prophecies dealing with Persia, war and the New City, also include references to France, ‘Those (actions) started in France will end there’, ‘France shall be accused of neglect by her five partners’, etc. France on the west’s side, along with Egypt on the east’s, has long been used and considered a fair and impartial middleman in negotiations between the globes two regions, religions and governments. Nostradamus would suggest that in this next confrontation, France will somehow let her partners, 5 of them, down.

Another hugely important line is, ‘By marine arts they will stir up rain’. The US government has been accused for decades of having “weather machines”, capable of creating hurricanes, earthquakes and other natural disasters. Could Nostradamus be describing this very same weapon, only being used in this coming conflict to the detriment of America’s own fleet?

Also consider another Quatrain about Arabia that describes a great battle to come:

On the field of Media, of Arabia and of ArmeniaTwo great armies will assemble thrice:The host near the bank of the Araxes,They will fall in the land of the great Suleiman.

Remember, ‘Media’ is in Iran. Armenia, Iran’s northern neighbor, has been forever fought over by the Turks, Persians, Russians and Europeans. The Araxes is located in eastern Turkey, the location of Iran’s announced invasion in response to a US or Israeli attack. And the land of the great Suleiman, is also Turkey. In fact, most of the above Quatrains reference ancient cities that are in either Iran or Turkey.

Let’s take a closer look at Nostradamus’ prediction that, “In the Gulf of Arabia, a great fleet will plunge to the bottom”. Right now as this article is being written, the US Navy has sped two full aircraft carrier fleets to the Arabian Sea, where they currently wait for a third US carrier fleet led by the USS Abraham Lincoln to arrive. While the US government insists it is simply a “coincidence”, having 3 full aircraft carrier fleets in the Arabian Sea at the same time is practically unheard of.

But could the Iranians sink the largest surface fleet in the world? Consider this quote from Military.com three years ago:

“Those two countries [Russia and China] have an advanced technology that most people dramatically underestimate. Russia right now has a few surface to surface missiles that we have no defense against except to put a helicopter in between the missile and the target. I hope and pray that we never have to go to war with Russia or China in the future especially after working intel in the Navy aboard the USS Enterprise. I’m not out of date either, I discharged off that ship august of 2007 and we were observing some serious. Most of those things would give you nightmares and cause utter chaos to the general public if they ever got wind of what was actually going on.”

Also remember the transfer of America’s top secret missile technology to China in the 1990’s by President Clinton. Read the Whiteout Press Timeless article, ‘How China Conquered America’ for details. That allowed Communist China, and her allies, to speed past the US in missile technology, allowing China to be the first country to successfully use weapons in outer space. That’s a fact. And with China and Russia’s command in missile armaments over the US, the first strike by any US enemy will be upon America’s satellites, thus rendering the entire United States military deaf, dumb, blind and immobile.

If Nostradamus’ predictions are accurate, it would appear the 16th century prophet is warning America that if it goes to war with Iran and the entire Muslim and Arab world, its fleet will be at the bottom of the Arabian Sea and hundreds of thousands of US troops stationed in the Middle East will be surrounded, cut-off and slaughtered, a thousand miles behind enemy lines.

While this American author doesn’t like imagining that any more than the next proud US citizen, a prudent war master like Sun Tzu would suggest, or demand rather, that we take into account all possibilities and warnings. For as Sun Tzu taught, ‘win the battle before you fight it’, and ‘only fight battles you’re positive you’re going to win’.

Also, as a life-long student of Sun Tzu, Nostradamus and others, this author can say with all honesty, God gave mankind freewill. That means nothing is written in stone. While our destiny is lodged in one outcome today, we have it in our power to change our destiny. The harder part is enlisting the humility to take an honest look at the current scenario and have the courage and readjust as needed. If that isn’t done, America may be doomed to repeat the Confederate quote from America’s civil war, “They’d rather lose the war than admit to the mistake”.

We, as well as most of the world, hope and pray that Israel, Iran and the United States somehow find a peaceful way to end this rapidly approaching conflict. As Nostradamus warns us, nobody will win. The US fleet will be at the bottom of the sea, Israel will be overrun, Turkey will be destroyed repeatedly, France will betray her allies, a monster will be born in Germany, Christianity will be destroyed, and the sea will be covered with Arab blood.

If that’s the tomorrow the citizens of Earth want, so be it. Those of us less motivated by greed, power and hate are begging the world’s leaders to slow down and see exactly where their actions, threats and pride are taking us, before it’s too late. 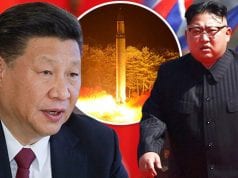 Nostradamus, Mabus, 3rd Antichrist and the meeting in China