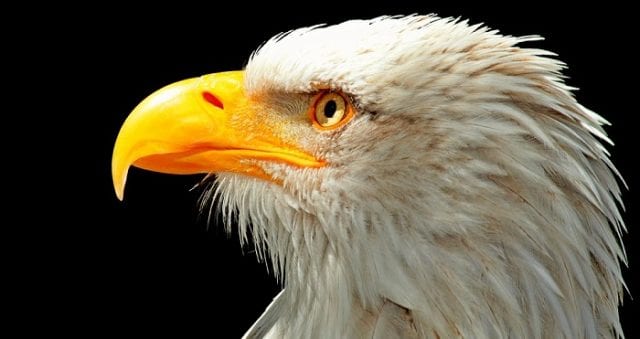 We at Whiteout Press came across this touching and impassioned poem way back in the late ’80’s or early ’90’s. We were at the height of our youthful idealism and undying patriotism. The author’s words inspired us to fight the good fight on behalf of the American people. Two decades later, from a dirty, yellowed piece of paper, we’ve transcribed the unforgettable words of Mr. Thelen Paulk.

I Saw A Wounded Eagle

I saw a wounded Eagle, amidst a stormy sky

his wounds, appearing fatal, suggested he would die

he barely had the stamina, his wings would need to fly

but an unknown source, of inner strength, enabled him to try

He flew out of the darkness, of the storm into the night

slow but quite consistent, was the weary Eagle’s flight

his pace was finally broken, by the early morning light

‘till the faces of Mount Rushmore, were a safe and welcome sight

His wounds had time to heal, while he took refuge there

the Eagle learned the wisdom, that the faces had to share

he would seek the aid of allies, like himself who truly care

a special breed of people, uniquely bold and rare

His mission still before him, the wind beneath his wing

he sought the Bell of Liberty, again to hear it ring

“The Star Spangled Banner”, I heard him proudly sing

to the remnant of Old Glory, I watched his talons cling

He gathered “We the People”, in hopes that he could find

a chosen few, who see the truth, though most today are blind

by bureaucrats and media, whose truth is well defined

for those whose thoughts can be controlled, deep in their narrow mind

The few that he was seeking, the few who understand

that Freedom has been tricked away, by simply slight of hand

by traitors who are building, what our enemies have planned

the few can help the Eagle, restore Freedom to our land

He pledged allegiance to the flag, encouraged by the few

and others came to realize, the truth they never knew

the few of “We the People”, immensely grew and grew

which made the traitors realize, they’ve lost control of you

They tried to kill the Eagle, for standing in their way

they left the Eagle wounded, his death not far away

but he’s returned to warn us, and make the traitors pay

the people now are waking up, the Eagle’s here to stay

His strength’s increased a hundred-fold, he’s soaring through the sky

he’s bringing back the Freedom, traitors stole from you and I

he’s seeking out their presence, with a vengeance in his eye

I saw a wounded Eagle, I couldn’t let him die