The current number plate system that we use today has been around since 2001. It is worth noting that Northern Ireland has its own system that is quite different from the GB system that includes Wales, England and Scotland. This system is not expected to change even once Brexit is complete and it is estimated that the current system will continue to produce combinations for the next 50 years.

The current system is different than the other previous plates used before 2001. For the purposes of this article, we are not going to look at these previous systems. Instead, we are going to dig deeper into the current system and help you understand it more clearly – brought to you by https://www.gbshowplates.co.uk 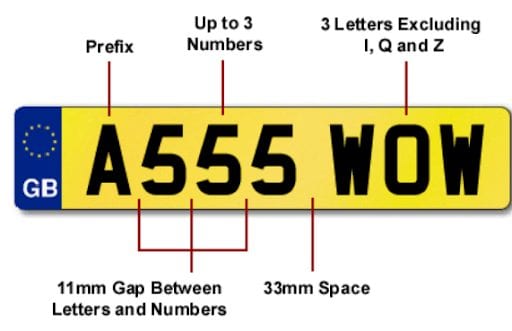 The first two letters on the number plate in the current system are an area code. This was originally the DVLA office where the car was first registered. In the spirit of efficiency, the DVLA closed all regional offices in 2013 and handles all new registrations with new cars via a streamlined online system.

But the system has not changed too much since car dealers still get allocated registration numbers that bear their area code. For example, if you are buying a new car at a dealership in London, you will be almost certainly be allocated a number plate that starts with an “L” (the letters will be LA-LY and excluding LI, LQ and LZ.)

Other regions of London will also have their own allocated letter codes. The letter code for Yorkshire for instance is Y and Hampshire and so on.

The two numbers on the number plate indicate the age of the identifier. In the current system this is the 6-month period that the car was first registered. At first this can seem confusing, but with a little detail you’ll soon see why it is the best possible system.

The number changes every six months in September and March. The March codes are easier to remember since they always follow the year of registration. For example a car that was registered between March and August of 2018 will have the number “18” in the number plate.

The final three numbers on your number plate are random. The general practice is that the car dealer will be allocated s batch of numbers by the DVLA and once they’ve used up that batch, they are allocated another. It is however worth mentioning that the letters “I” and “Q” are not used. The DVLA reserves these combinations as they may be considered offensive. This current system is expected to run until 2051, at which time the number code will be 00.