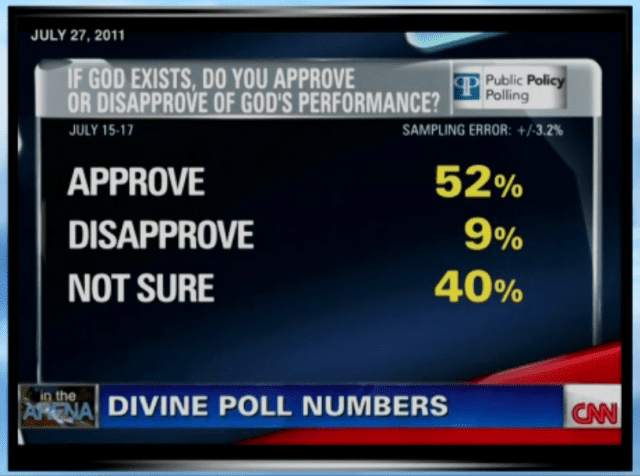 August 26, 2011. With the daily barrage of negative data and poll numbers Americans receive each day, the country’s politicians can take some comfort in knowing that even God is having a hard time pleasing His constituents. While reviewing today’s latest poll numbers from AP, we at Whiteout Press decided to do a little research. We don’t know if it’s funny or disturbing that out of all of Congress and the White House, there are only two whose approval rating is higher than their disapproval rating – God and Ron Paul.

Here are the specific details of today’s AP-Roper-GfK poll:

Today’s Examiner.com article referenced a recent Whiteout Press article. We thought we’d return the favor. The Examiner article, ‘Poll Says Congress Approval at 12 Percent’ makes a couple noteworthy observations. Most notably, the only politician in today’s AP poll from either the Republican side or the Democrats’ ranks whose Approval rating is higher than his Disapproval rating is Rep. Ron Paul (R-TX). As acknowledged in today’s Examiner article, good luck finding that fact mentioned in the mainstream media. The press has all but declared war on the Presidential candidate. Read the Whiteout Press article, ‘Mainstream Media not so Mainstream’ to find out more.

That leads us to another interesting fact. In a recent Harris poll published at DemocraticUnderground.com, the mainstream media’s Approval rating is an abysmal 10 percent. Proving that nobody can please all the people all the time, even God is having his share of PR problems. A poll from KSL TV/Radio in Salt Lake City shows that even God’s Approval rating is only 52 percent. We don’t know if that’s funny or disturbing.