Genesis and the Twelfth Planet
By Mark Wachtler

June 2, 2011. Tokyo. (ONN) After two years of observation in the direction of the ‘Galactic Bulge’, physicists from around the world announced the results of their joint study. Published in the journal Nature, the scientists reveal an incredible discovery that may rewrite modern man’s ‘laws of nature’. Numbering more than double the number of main stars, they found Jupiter-sized planets freely roaming the galaxy, possibly entering our own Milky Way at some time in the future.

The amazing discovery of these large planets may violate the actual definition of a planet. Science insists that for an object to be a planet, it must orbit a star. If it orbits another planet for example, it would be classified as a moon. The journal Nature reports that since 1995, more than 500 planets have been discovered that appear to be randomly roaming the galaxy. Scientists are puzzled because it’s long been their belief that planets can only be formed by revolving around a larger object until enough dust and debris can accumulate and bind together to give birth to that planet.

Experts familiar with the study and the various theories explaining the anomaly are divided into two camps of thought. One side believes these planets were formed in the typical fashion, by orbiting another object. They theorize that for one reason or another, these free-roaming planets were somehow knocked out of their original orbit and now travel the galaxy as loan planets without a solar system.

The other side of the argument suggests that perhaps these planets actually are orbiting stars. They believe it would be presumptuous to assume all planets in the universe orbit their sun in the same short-term time frame as Earth – one evolution every year. If their theory is correct and these planets revolve around stars at such an extreme distance that their star isn’t even findable, it could take as long as ten thousand years to a million years to make one revolution.

Among these believers are also a handful of experts who suggest that some of these planets may be in somewhat of an ‘irregular orbit’. Unlike Earth, they may not revolve around their star at a constant distance or speed. Much like the Apollo spacecraft used the Moon’s gravity to sling-shot around it and gain enough speed to return to Earth, these planets may do the same thing in their orbit. Speeding up as they get closer to their star, the planet would also sling-shot around its sun and then be violently thrown out into space. After a while, the star’s gravity would slowly bring the planet back again.

Until now, such wild theories as free-roaming planets were considered science fiction. This recent discovery however, may open the books on some long-dismissed ideas that seemed crazy at the time. Like the fabled city of Troy that turned out to be real or our round planet that wasn’t flat after all, even some eyebrow-raising concepts are getting a second look. One of them is ‘The 12th Planet’ – an idea most notably raised by author Zecharia Sitchin in his 1976 book by the same name.

Sitchin explains the origins of his theory in the prologue of his book:

“As a young schoolboy studying Genesis in its original Hebrew, I created a confrontation of my own. We were reading one day in Chapter VI that when God resolved to destroy Mankind by the Great Flood, ‘the sons of the deities’, who married the daughters of men, were upon the Earth. The Hebrews originally named them Nefilim; the teacher explained it meant ‘giants’; but I objected: didn’t it mean literally ‘Those Who Were Cast Down’, who had descended to Earth? I was reprimanded and told to accept the traditional interpretation”.

Zecharia Sitchin didn’t accept the traditional interpretation however. Instead, he began a life-long expedition to discover the true origins of man. Along the way, he made two startling discoveries. The first involved the basic nature of man himself. Sitchin came to the conclusion that mankind isn’t a natural fit on planet Earth. And if the theory of evolution is correct, how is it that human beings represent only one specific version. If life can evolve from microscopic dust to you and me, why isn’t there a never-ending string of variations, at all stages of evolutionary change?

Instead, according to Sitchin, science insists that man evolved from ‘ape-men’ beginning 25,000,000 years ago. For roughly 22,000,000 years, there was no evolution. Then, almost 3 million years ago, the first ape-man worthy of the classification ‘Homo’ appeared. For 2,000,000 years, a Neanderthal-type version of man roamed the Earth. Like their predecessors, their features and appearance hadn’t evolved at all. Even their tools and weapons, sharp stones, hadn’t evolved in over two million years.

Sitchin explains his first discovery, “Then, suddenly and inexplicably, some 35,000 years ago, a new race of Men – Homo sapiens – appeared as if from nowhere, and swept Neanderthal Man from the face of Earth”. He explains that these new-comers “looked so much like us that, if dressed like us in modern clothes, they would be lost in the crowds of any European or American city”. These facts aren’t a crazy conspiracy, but accepted by all modern scholars. Where they differ from Sitchin is that they see no problem with the traditional theory. Sitchin however, found it odd that man hadn’t changed or evolved one bit in over 25,000,000 years. But somehow, in just 35,000 years, we suddenly went from cavemen to computers and space shuttles. For Sitchin, it didn’t add up.

With that mystery in mind, Zecharia Sitchin made his second major discovery, and for him, it connected everything. It’s no secret that one of man’s eternal specialties is astronomy. Most civilizations discovered and detailed the planets in our solar system centuries ago. Sitchin found one ancient Sumerian text containing details of planetary orbits that didn’t match the rest. This one included an extra planet that had an irregular orbit around our sun. The Mesopotamians called it ‘Marduk’. 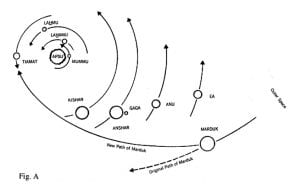 That’s when Sitchin believed he solved the mystery. To him, and millions of believers around the world today, it all pieced together. The theory states that our Solar System contains a twelfth planet, Marduk. In its irregular orbit, it sling-shots far off into the galaxy before returning again – every 3,600 years. Looking back through history, Sitchin points out the formerly inexplicable leaps in technology, knowledge and population.

The book begins with the discovery and practice of agriculture around 11,000 B.C. It then leaps to the birth of the Neolithic period approximately 7,500 B.C. From there, history jumps to the rapid advancements of both the Egyptian and Sumerian civilizations around 3,800 B.C. Finally, the last interval was at the beginning of Man’s ‘age of empires’, approximately 200 B.C. If Sitchin’s timeline is correct, the next time planet Marduk passes through will be 3,400 A.D. Based on the formula, each of these rapid advancements are separated by a period of approximately 3,600 years.

Unfortunately, Zecharia Sitchin passed away last year. A tribute and memorial to his memory was held two weeks ago in New York. Find out more about the books of Zecharia Sitchin at his website.

WhiteOut Press - June 27, 2022 0
HIV-Negative AIDS spreads to China By Mark Wachtler Share Subscribe to Whiteout Press. It's FREE and you can unsubscribe at any time. Just 1 weekly email. May 17,...