October 8, 2013. Toledo. (ONN) Federal authorities swept up 13 more Anonymous members and indicted each of them on one count of ‘conspiracy to intentionally cause damage to a protected computer’. The alleged crimes occurred during a three-month period beginning in 2010 in defense of Wikileaks and Julian Assange. Ironically, a Federal agent was the leader of the group, causing many to accuse the government of entrapment. 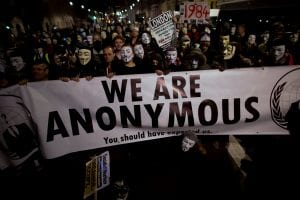 OnThursday, 13 more US members of Anonymous were arrested.

The 13 cyber activists are accused of letting their computers take part in a DDoS (Distributed Denial of Service) attack on a number of computer networks of corporations that were taking part in the establishment’s attempt to shut down Wikileaks and silence Julian Assange. Wikileaks’ bank froze its account. Visa and Master Card stopped processing payments for the group. And Paypal froze the organization’s account, refusing to release Wikileaks’ funds.

All of those multi-national financial firms were targeted and victimized by a loose but united effort by tens of thousands of Wikileaks and Anonymous supporters around the world. The assault began with an attack against a file-sharing company called The Pirate Bay. Amazon and US Sen. Joseph Lieberman were two of the next victims. From there, the attacks became localized and specific. Wikilkeaks’ Swiss bank Post Finance was hit. Then, the Swedish prosecutors and lawyers attempting to prosecute Assange were brought down.

Fortunately for the victims, little or no damage was actually done during the Operation Payback cyber attacks. The corporate sites were down for as little as a few hours. No customer information was stolen and the companies’ secure files were never breached. The hackers simply overloaded their corporate servers with imaginary traffic. According to Thursday’s indictment, all 13 of Anonymous members are from the US and 11 of them are in their 20’s. One is a 53-year-old man from Ohio and another is a 65-year-old man from New Hampshire.

The most shocking aspect of the indictments is the fact that the Operation Payback attacks were led by a man working as an undercover FBI informant at the time. Federal agents didn’t just monitor the planning and carrying out of the attacks. Their own agent was the leader who planned the operation, gave the orders, led the attacks and badgered and coerced anyone who didn’t want to take part or wanted to quit.

As detailed in the amazingly informative book ‘We Are Anonymous’, Hector ‘Sabu’ Monsegur was the leader of Anonymous. He had already been arrested and agreed to work for the FBI to catch other Anonymous members. But they didn’t use the traditional and legitimate method of using their agent to accumulate evidence or admissions of guilt from past crimes. Instead, the FBI and their new agent went the route of the first World Trade Center bombing and actually planned, recruited and orchestrated future crimes.

That future crime the FBI planned and executed with the help of tens of thousands of unsuspecting Anonymous and Wikileaks supporters was Operation Payback. It’s strange that for a crime the FBI orchestrated and led, it took three years to accumulate evidence and bring charges against the latest 13 arrestees.

Read the Whiteout Press article, ‘Book Review – We Are Anonymous’ for details.