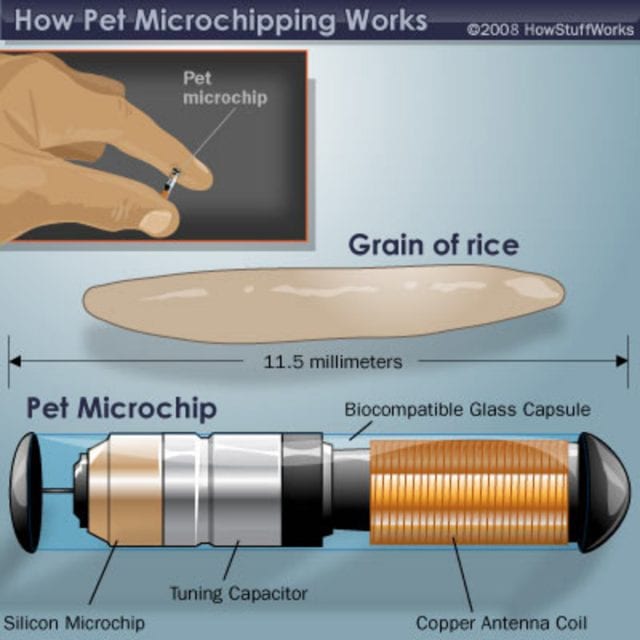 A tiny chip implanted inside the human body to send and receive radio signals, long thought to be the realm of paranoids, is likely to be marketed to consumers in coming years. Several “bio-chip” technologies currently available will enable electronics firms to make and market the devices, whose benevolent attributes include the ability to locate missing children.

Among the advocates are [name withheld], a Colorado Springs couple whose seven month old son Christopher was abducted from his crib ten years ago and has not been seen since. “A stranger walked into the room while we slept and took him away” they told Boulder Weekly. The couple supports the technology because if such a device were in Christopher, communications satellites already in orbit could have reported his location anywhere on Earth to police in a matter of seconds.

But critics include Ernie Allen, president of the National Center for Missing and Exploited Children. “The whole issue causes a lot of concern about ‘big brother’ and the general misuse of technology” Allen said, “Our judgment is that the negative concerns far outweigh the benefits.” Allen noted that 99 percent of missing children are successfully recovered.

Large segments of the nation’s growing patriotic and religious communities insist that governments ultimately will misuse the technology. A Colorado physician, Dr. Daniel Man, has designed and patented a grain of rice sized homing device, ostensibly for use in children, convicts and other limited circumstances.

Implant technology is not new. Although routinely ridiculed as a paranoid delusion, the FDA has mandated electronic bio-chip implants into humans receiving pacemakers, prosthetic devices and even breast implants since 1994. Literally thousands of Americans now carry these micro-devices under their skin. The implants contain digital information about the prosthetic device, and patient information for physicians to electronically collect whenever needed.

The Drug Enforcement Administration has used tiny electronic tracking implants on so-called “precursor” chemicals for over a decade. These micro-transmitters, smaller than a paper clip, are impregnated into the lids of ether and other cocaine-processing chemicals exported to South America as a means of locating remote laboratories in the jungles of Columbia, Bolivia and Peru. Endangered animals and livestock also carry implants to track their migration or feeding habits. But it is the newly unveiled human variety of bio-chip technology that is causing the stir.

The Boulder Weekly quoted Texe Marrs, a political science professor and author of ‘Dark Secrets of the New Age’ as saying the implants will likely “be used by a one-world government to track people and exercise control over their lives. There is a lot of evidence that chips are under development that can tie into the brain’s neuro-network, giving someone who controls the chip the ability to control the thoughts and actions of anyone who contains the chip.”

Strangely enough, it is a matter of record that Timothy McVeigh (convicted of the OK City Federal building bombing), arranged to have his hip x-rayed by a doctor in 1994 to determine if a “bio-chip” implant had been inserted under his skin when he was in the US Army. According to the specialist, McVeigh inexplicably changed his mind on the day of the appointment.

Dr. Man’s satellite-linked human implant raises a number of privacy issues; one man’s delusion is another man’s pending reality. As far as human tracking technology goes. Palestinians working inside Israel are required to carry a bio-chip implanted identification card with them at all times to denote their whereabouts. Israeli officials can determine the location of all non-Jewish workers at the push of a computer key.

Similarly implanted ‘Smart Cards’ are being tested in Boston, Orlando and Baltimore, advising toll booth operators of the vehicle, owner registration and the amount of prepaid toll left on the card. Others are using Dr. Man’s device for tracking those under house arrest or some other form of criminal justice detention.

Although the relative physiological safety of the implants seems clear, what happens when the individual becomes ill or encounters an infection at or near the site of the implant? Medical ethicists have pointed to problems with silicon breast implants containing these devices.

Mainstream newspapers, like the May 7, 1996 Chicago Tribune, are now addressing issues surrounding these implants without being accused of engaging in conspiracy theories or paranoid delusions. The fact that the human implant story made waves in the alternative media months ago suggests that the press is either catching up, or catching on.