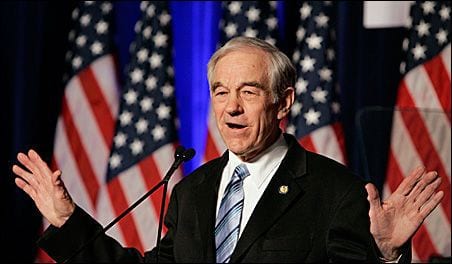 June 30, 2011. Galveston, TX. Ron Paul 2008 was a movement. Ron Paul 2012 is trying to be a campaign. That’s the message on the Ron Paul for President website. Four years ago, Ron Paul produced what many have called a moderately successful grassroots Presidential campaign. This time around, Paul and his supporters haven’t just picked up where they left off, they’ve stepped up their game and are looking to prove tonight that they can play with the big boys.

That’s the deadline for receiving campaign donations, midnight tonight, for the second quarter reporting period. Anyone who remembers the Presidential campaign four years ago knows how important a good showing is when it comes to fundraising. While President Obama set all kinds of records for the most money raised, the majority of the attention was on Hillary Clinton and the Republican field of candidates. ‘Could they raise enough money to be competitive?’ ‘Could they raise enough money early on to prove to the big-money donors that their campaign has a chance and is worthy of their support?’ Those were the questions four years ago and they’re bound to be the questions this time around too.

Like a twenty-first century barometer, early fundraising is key to landing powerful endorsements and big-time contributions. With many political pundits insisting that a successful candidate will need to raise a record-breaking $1 billion dollars, money is more important than ever. To put it in perspective, President Obama raised $745 million dollars in 2008. This will be the second test for the vast field of potential challengers to the President. The first was the recent New Hampshire Republican Candidates Debate. Read Whiteout Press’ recap of that event here.

Two weeks ago, the Ron Paul campaign sent out a request to its supporters for help in the contribution department. In 2008, Paul’s Presidential campaign was funded mainly by small individual contributions and fueled with the energy of college students all over the nation. But those weren’t the only major contributors to Ron Paul’s run. There was another segment of the population that overwhelmingly supported Ron Paul and it was quite the surprise.

The US Military – In 2008, active duty soldiers and military veterans alike supported Ron Paul’s Presidential campaign in impressive fashion. At this exact moment in the 2008 campaign, Ron Paul led all 19 candidates for President in the area of donations from American military personnel and veterans. President Obama came in second, with military hero John McCain coming in third and Hillary Clinton fourth.

Of the 19 US Senators, Congressmen, Governors and Mayors in the race, Paul received a staggering 26 percent of all military contributions. In fact, Paul received more help from the soldiers fighting and dieing for our country than 15 of the candidates combined. Those 15 included formidable contenders such as Bill Richardson, John Edwards, Rudy Giuliani, Mike Huckabee, Joe Biden and even Mitt Romney. See the full list here.

Also at this point four years ago according to Federal Election Commission reporting, the Ron Paul campaign had raised a total of $2.3 million dollars during the three month second quarter. And that’s why Congressman Paul’s supporters are so excited this time around. In the campaign’s appeal for donations at the beginning of this month, they set a lofty goal of raising $3 million dollars by midnight tonight. One week ago, they upped the ante.

Announcing that Congressman Paul’s supporters had come through in heroic style, they raised the target to an impressive $5 million dollars. The campaign had already sailed past the $3 million dollar goal and was rapidly approaching $4 million.

Considering some of Ron Paul’s opponents can raise that amount in one luncheon, the champion of American liberty will still need to raise the bar. But for now, and compared to 2008 and the respectable finish Paul had then, the Ron Paul 2012 campaign is showing it has what it takes to lead the libertarian, fiscally conservative wing of the GOP against the corporation supported, billionaire wing of the Republican party.

To help Congressman Paul in his fundraising push before tonight’s deadline for reporting, visit RonPaul.com.