As the second millennium gives way to the third, Pope John Paul II has decided to publish the text of the third part of the “Secret of Fatima”.

The twentieth century was one of the most crucial in human history, with its tragic and cruel events culminating in the assassination attempt on the “sweet Christ on earth”. Now a veil is drawn back on a series of events which make history and interpret it in depth, in a spiritual perspective alien to present-day attitudes, often tainted with rationalism.

Throughout history, there have been supernatural apparitions and signs which go to the heart of human events and which, to the surprise of believers and non-believers alike, play their part in the unfolding of history. These manifestations can never contradict the content of faith, and must, therefore, have their focus in the core of Christ’s proclamation: the Father’s love which leads men and women to conversion and bestows the grace required to abandon oneself to him with filial devotion. This too is the message of Fatima which, with its urgent call to conversion and penance, draws us to the heart of the Gospel.

Fatima is undoubtedly the most prophetic of modern apparitions. The first and second parts of the “secret”—which are here published in sequence so as to complete the documentation—refer especially to the frightening vision of hell, devotion to the Immaculate Heart of Mary, the Second World War, and finally the prediction of the immense damage that Russia would do to humanity by abandoning the Christian faith and embracing Communist totalitarianism.

In 1917 no one could have imagined all this: the three pastorinhos of Fatima see, listen and remember, and Lucia, the surviving witness, commits it all to paper when ordered to do so by the Bishop of Leiria and with Our Lady’s permission.

For the account of the first two parts of the “secret”, which have already been published and are therefore known, we have chosen the text written by Sister Lucia in the Third Memoir of 31 August 1941; some annotations were added in the Fourth Memoir of 8 December 1941.

The third part of the “secret” was written “by order of His Excellency the Bishop of Leiria and the Most Holy Mother …” on 3 January 1944.

There is only one manuscript, which is here reproduced photostatically. The sealed envelope was initially in the custody of the Bishop of Leiria. To ensure better protection for the “secret” the envelope was placed in the Secret Archives of the Holy Office on 4 April 1957. The Bishop of Leiria informed Sister Lucia of this.

According to the records of the Archives, the Commissary of the Holy Office, Father Pierre Paul Philippe, OP, with the agreement of Cardinal Alfredo Ottaviani, brought the envelope containing the third part of the “secret of Fatima” to Pope John XXIII on 17 August 1959. “After some hesitation”, His Holiness said: “We shall wait. I shall pray. I shall let you know what I decide”.

In fact Pope John XXIII decided to return the sealed envelope to the Holy Office and not to reveal the third part of the “secret”.

Paul VI read the contents with the Substitute, Archbishop Angelo Dell’Acqua, on 27 March 1965, and returned the envelope to the Archives of the Holy Office, deciding not to publish the text.

John Paul II, for his part, asked for the envelope containing the third part of the “secret” following the assassination attempt on 13 May 1981. On 18 July 1981 Cardinal Franjo Šeper, Prefect of the Congregation, gave two envelopes to Archbishop Eduardo Martínez Somalo, Substitute of the Secretariat of State: one white envelope, containing Sister Lucia’s original text in Portuguese; the other orange, with the Italian translation of the “secret”. On the following 11 August, Archbishop Martínez returned the two envelopes to the Archives of the Holy Office.

The decision of His Holiness Pope John Paul II to make public the third part of the “secret” of Fatima brings to an end a period of history marked by tragic human lust for power and evil, yet pervaded by the merciful love of God and the watchful care of the Mother of Jesus and of the Church.

THIRD PART OF THE “SECRET”

The third part of the secret revealed at the Cova da Iria-Fatima, on 13 July 1917.

I write in obedience to you, my God, who command me to do so through his Excellency the Bishop of Leiria and through your Most Holy Mother and mine.

After the two parts which I have already explained, at the left of Our Lady and a little above, we saw an Angel with a flaming sword in his left hand; flashing, it gave out flames that looked as though they would set the world on fire; but they died out in contact with the splendour that Our Lady radiated towards him from her right hand: pointing to the earth with his right hand, the Angel cried out in a loud voice: ‘Penance, Penance, Penance!’. And we saw in an immense light that is God: ‘something similar to how people appear in a mirror when they pass in front of it’ a Bishop dressed in White ‘we had the impression that it was the Holy Father’. Other Bishops, Priests, men and women Religious going up a steep mountain, at the top of which there was a big Cross of rough-hewn trunks as of a cork-tree with the bark; before reaching there the Holy Father passed through a big city half in ruins and half trembling with halting step, afflicted with pain and sorrow, he prayed for the souls of the corpses he met on his way; having reached the top of the mountain, on his knees at the foot of the big Cross he was killed by a group of soldiers who fired bullets and arrows at him, and in the same way there died one after another the other Bishops, Priests, men and women Religious, and various lay people of different ranks and positions. Beneath the two arms of the Cross there were two Angels each with a crystal aspersorium in his hand, in which they gathered up the blood of the Martyrs and with it sprinkled the souls that were making their way to God.

CONVERSATION WITH SISTER MARIA LUCIA OF JESUS AND THE IMMACULATE HEART

The meeting between Sister Lucia, Archbishop Tarcisio Bertone, Secretary of the Congregation for the Doctrine of the Faith, sent by the Holy Father, and Bishop Serafim de Sousa Ferreira e Silva, Bishop of Leiria-Fatima, took place on Thursday, 27 April 2000, in the Carmel of Saint Teresa in Coimbra.

Sister Lucia was lucid and at ease; she was very happy that the Holy Father was going to Fatima for the Beatification of Francisco and Jacinta, something she had looked forward to for a long time.

The Bishop of Leiria-Fatima read the autograph letter of the Holy Father, which explained the reasons for the visit. Sister Lucia felt honoured by this and reread the letter herself, contemplating it in own her hands. She said that she was prepared to answer all questions frankly.

At this point, Archbishop Bertone presented two envelopes to her: the first containing the second, which held the third part of the “secret” of Fatima. Immediately, touching it with her fingers, she said: “This is my letter”, and then while reading it: “This is my writing”.

The original text, in Portuguese, was read and interpreted with the help of the Bishop of Leiria-Fatima. Sister Lucia agreed with the interpretation that the third part of the “secret” was a prophetic vision, similar to those in sacred history. She repeated her conviction that the vision of Fatima concerns above all the struggle of atheistic Communism against the Church and against Christians, and describes the terrible sufferings of the victims of the faith in the twentieth century.

When asked: “Is the principal figure in the vision the Pope?”, Sister Lucia replied at once that it was. She recalled that the three children were very sad about the suffering of the Pope, and that Jacinta kept saying: “Coitadinho do Santo Padre, tenho muita pena dos pecadores!” (“Poor Holy Father, I am very sad for sinners!”). Sister Lucia continued: “We did not know the name of the Pope; Our Lady did not tell us the name of the Pope; we did not know whether it was Benedict XV or Pius XII or Paul VI or John Paul II; but it was the Pope who was suffering and that made us suffer too”.

As regards the passage about the Bishop dressed in white, that is, the Holy Father—as the children immediately realized during the “vision”—who is struck dead and falls to the ground, Sister Lucia was in full agreement with the Pope’s claim that “it was a mother’s hand that guided the bullet’s path and in his throes the Pope halted at the threshold of death” (Pope John Paul II, Meditation from the Policlinico Gemelli to the Italian Bishops, 13 May 1994).

Before giving the sealed envelope containing the third part of the “secret” to the then Bishop of Leiria-Fatima, Sister Lucia wrote on the outside envelope that it could be opened only after 1960, either by the Patriarch of Lisbon or the Bishop of Leiria. Archbishop Bertone therefore asked: “Why only after 1960? Was it Our Lady who fixed that date?” Sister Lucia replied: “It was not Our Lady. I fixed the date because I had the intuition that before 1960 it would not be understood, but that only later would it be understood. Now it can be better understood. I wrote down what I saw; however it was not for me to interpret it, but for the Pope.

Finally, mention was made of the unpublished manuscript which Sister Lucia has prepared as a reply to the many letters that come from Marian devotees and from pilgrims. The work is called Os apelos da Mensagem de Fatima, and it gathers together in the style of catechesis and exhortation thoughts and reflections which express Sister Lucia’s feelings and her clear and unaffected spirituality. She was asked if she would be happy to have it published, and she replied: “If the Holy Father agrees, then I am happy, otherwise I obey whatever the Holy Father decides”. Sister Lucia wants to present the text for ecclesiastical approval, and she hopes that what she has written will help to guide men and women of good will along the path that leads to God, the final goal of every human longing.The conversation ends with an exchange of rosaries. Sister Lucia is given a rosary sent by the Holy Father, and she in turn offers a number of rosaries made by herself. 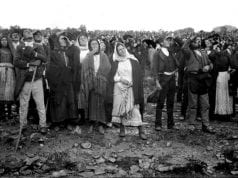 Mystery And Miracle Of Fatima